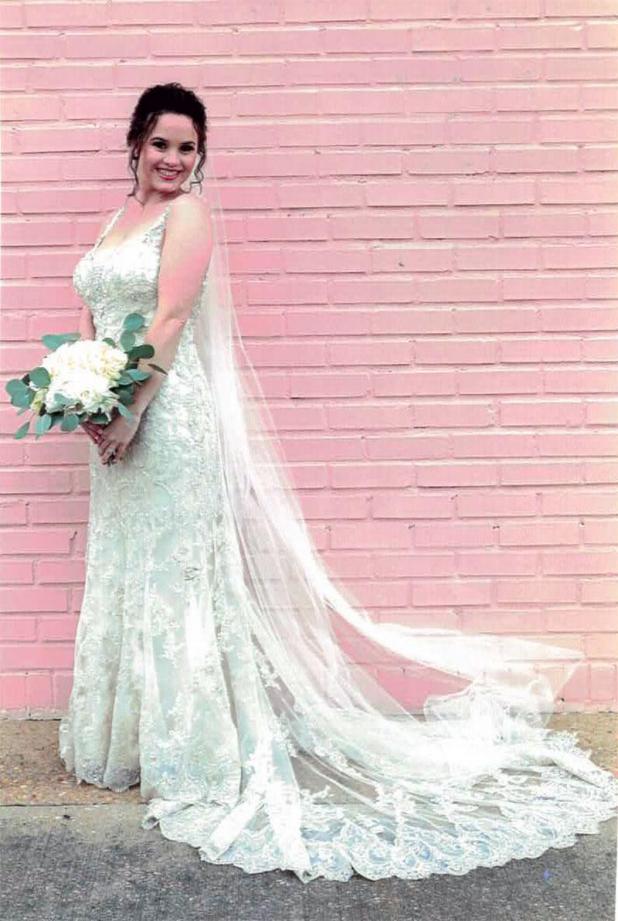 Amanda Hardy of Lafayette, LA and Cameron Cambre of Lafayette, LA were united in a nuptial mass on Friday, June 5, 2020, at St. Mary Magdalen Catholic Church in Abbeville, LA. Father Don Bernard and Deacon Joe Hebert officiated the 7 p.m. ceremony.
The bride is the daughter of Edward Hardy II and Laura Menard Hardy. She is the granddaughter of Johnnie and Edward Hardy of Abbeville, LA and the late Codrey and the late Eves Menard of Abbeville, LA.
The groom is the son of Andre Cambre and Leslie Leblanc Cambre and the grandson of the late John LeBlanc and Lois LeBlanc of Delcambre, LA and the late Rodney Cambre, Sr. and the late Jean Marie Cambre of Norco, LA.
Escorted by her father, the bride wore a fit and flare vintage inspired gown from Essence of Australia. It featured pearl bead work with ivory silver lace over almond tulle and cafe lavish satin. The illusion straps with heavy beading connected at the sweetheart neckline and formed an open back covered in sparkling gems. A finished hem and chapel train rounded out this vintage look. The bride wore a simple chapel length vail to complete her look.
The bride carried a clutch of pale blush hydrangea and a touch of silver dollar eucalyptus with her mothers’ rosary wrapped around ivory lace with beaded ribbon.
Serving as Matron of Honor was Elizabeth LeMaire, sister of the bride. Bridesmaids included Michelle Wilbanks, sister of the bride, Caroline Cambre, sister of the groom, Danielle Hebert, cousin of the bride and Caroline Kimmel, friend of the bride.
Bridesmaids wore floor length chiffon dresses in pale blush and pale mauve tones. They carried a clutch of hydrangea, baby’s breath and eucalyptus. The mother of the bride was escorted by her son in law Justin Wilbanks, and the mother of the groom was escorted by Andre Cambre.
Aaron Cambre, brother of the groom, attended as Best Man. Groomsmen included Clayton Cambre, brother of the groom, Matthew LeMaire, brother in law to the bride, Justin Wilbanks, brother in law to the bride, and Sean Henagan, friend of the groom.
Ushers for the ceremony included James Luquette, cousin of the bride and Grant Leblanc, cousin of the groom.
Music for the ceremony was provided by Organist Tommy Guidry and Violinist Emil Ivanov. Readings were given by Cindy Luquette, Aunt of the bride and Angie Hebert, Aunt of the bride.
After the ceremony, a formal reception was held at Magdalen Place in Abbeville, LA.
The couple will reside in Lafayette, LA after a wedding trip to San Antonio, Texas, with a trip to Greece to follow at a later date.