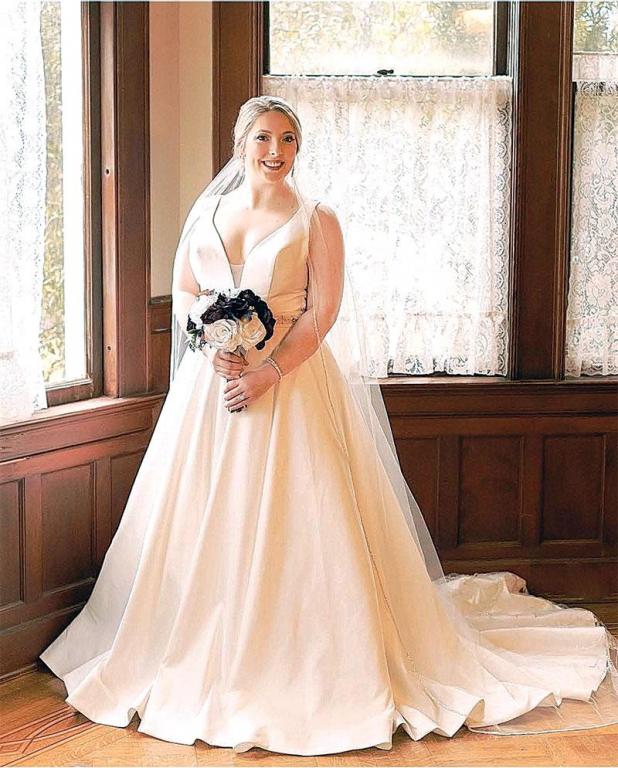 Natalie Blair Choplin, of Lafayette, LA and Dylan Joseph Touchet, of Maurice, LA, were united in a nuptial mass on Saturday, February 1, 2020, at St. Mary Magdalen Roman Catholic Church in Abbeville, LA. Father Donald Bernard officiated the 6:30 p.m. ceremony.
The bride is the daughter of Mr. and Mrs. Chad Choplin of Lafayette, LA and the granddaughter of Nan Hadaway and the late Leslie Broussard, of Lafayette, LA and Pierre Louis Choplin and the late Barbara Choplin of Duson, LA.
She is a 2012 graduate of Comeaux High School in Lafayette, LA and a 2016 graduate of Louisiana State University with a Bachelor’s of Science in Biological Sciences, a 2019 graduate of Mississippi College with a Master of Science in Biology, Medical Sciences. She is currently employed at Lafayette Bone and Joint Clinic in Lafayette, LA.
The groom is the son of Mr. and Mrs. Kim Touchet of Maurice, LA. and the grandson of Eurice Touchet and the late Eldes Touchet of Abbeville, LA and Sonja Gaspard and the late Carroll “CJ” Gaspard of Abbeville, LA.
He is a 2011 graduate of North Vermilion High School in Maurice, LA and a 2015 graduate of Louisiana State University with a Bachelor of Science in Kinesiology, a 2019 graduate of University of Louisiana at Lafayette with a Master of Business with a concentration in Healthcare Administration. He is currently employed by Precision Rehabilitation in Abbeville, LA.
Escorted by her father, Chad Choplin, the bride wore a gorgeous sleeveless silk Mikado ballgown which drops to a deep sweetheart neckline and pleats at the waist. The waist was accented with an elegant rhinestone belt and the back was adorned with dramatic lace and rhinestone beading. She completed her look with a cathedral length veil trimmed with delicate rhinestone details.
The bride carried a bouquet of dark plum calla lillies and white roses detailed with gold accents. Entwined in her bouquet was lace taken from her mother’s bridal gown.
Serving as Maid of Honor was Tori Lasseigne, friend of the bride. Bridesmaids included Ramie Choplin, sister of the bride, Maegan Courville, Renne Angelle and Jian Massucco, all friends of the bride. They wore elegant full length crepe dresses with a woven crisscross spaghetti strap detail at the open back and a side slit trumpet skirt in an eggplant color. Serving as flower girls were Ellen Prejean, gochild of the groom and Emmy Prejean, cousin of the groom. Both are daughters of Zach and Kati Prejean.
Cameron Touchet, brother of the groom attended as Best Man. Groomsmen included Thai Schexnaider, Scott Salinas, Trevor Picard and Jeffery Johnson, all friends of the groom.
Serving as ring bearer was Eli Prejean, son of Zach and Kati Prejean.Ushers for the ceremony included Neil Touchet, Godfather of the groom and Bryce Gooch, cousin of the groom.
Scriptural readings were given by Tanya McBride, cousin of the groom and Stephanie Broussard, Godmother of the bride.
Music for the ceremony was provided by Organist, Tommy Guidry and Violinist Emil Ivanov.
A rehearsal dinner, hosted by the grooms parents, Kima and Jodie Touchet, took place on Friday, January 31 at Riverfront in Abbeville, LA.
After the ceremony, a formal reception was held at Magdalen Place in Abbeville, LA. The bride’s cake was a 4 tiered wedding cake with each tier filled with the assorted flavors of lemon, strawberry cream cheese, chocolate and almond buttercream. It was beautifully adorned with dark purple flowers and detailed with gold accents. The bride’s cake was served by Stephanie Broussard, the bride’s Godmother.
The groom’s cake was a 2 tier cookies and cream filled cake featuring the groom’s alma mater, LSU, using the tiger eye logo on one tier. The second tier represented the groom’s love of duck hunting. It was served by Carolyn Gaspard, godmother of the groom.
After a wedding trip to Whistler, Canada, the couple will reside in New Orleans, where the bride will be attending Medical school at LSU Health Sciences Center.