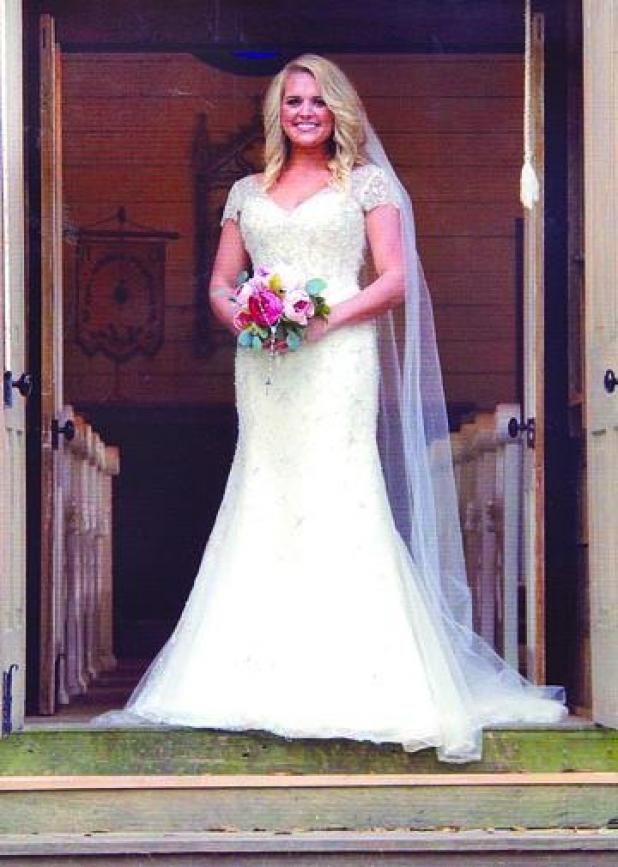 Miss Ahna Maria Bergeron and Mr. Jacob Nelson Trahan were united in marriage on Saturday, October 28, 2107, at St. Theresa Catholic Church in Abbeville.
The 7 p.m. ceremony was officiated by Father Gregory Cormier, Alan Stakes, brother-in-law of the bride.
Ceremony readings were given by Julie Trahan, sister-in-law of the groom.
The bride is the daughter of Celina and Guy Bergeron of Erath, La. Her grandparents are the late Doris and Iry Melancon of Erath and Wilda Leblanc and the late Avery Bergeron of Abbeville, La.
The groom is the son of Jacalyn and John Alton Trahan, Jr. of Esther, La. His grandparents are Lucy Mae and the late Nelson Sagrera of Esther and the late Elodie and John Alton Trahan, Sr., of Abbeville.
Given in marriage by her parents and escorted by her father, the bride wore an elegant ivory champagne gown with beaded capped sleeves. The gown displayed a V-neck neckline trimmed in beautiful bead work that remained throughout the dress in it’s mermaid shape. She carried a bouquet made from the bride’s favorite flowers of pink and ivory peonies with a spray of eucalyptus, finished with a rosary made of rose petals from her late grandmother.
Amy Stakes and Kelli Hollier, both sisters of the bride, served as matrons of honor. Bridesmaids included Shalee Bergeron, sister-in-law of the bride; Jessica Campisi, sister of the groom; Katie Huval, cousin of the bride and Chelsey Huval, cousin of the bride. Junior bridesmaids included Isabella Hollier, godchild of the bride; Karoline Hollier, niece of the bride; Madelyn Campisi, niece of the groom; Olivia Stakes, niece of the bride and Gabriella Hollier, niece of the bride. The flower girls was Claire Trahan, niece of the groom.
Aaron Trahan, brother of the groom, and Christopher Campisi, brother-in-law of the groom, both served as best men. Groomsmen included Dreycen Bergeron II, brother of the bride; Ike Sagrera, cousin of the groom; Reggie Hebert, friend of the groom; Aaron Lee, freind of the groom; Patrick Trahan, godchild of the groom and John-Ross Hollier, godchild of the bride. Ring bearers were Dreycen Bergeron III, nephew of the bride and Hudson Bergeron, godchild of the bride. Ushers were Luther Abbott, brother of the bride; Caden Campisi, godchild of the groom and Kip Trahan, nephew of the groom.
Dexter Thibodeaux provided music for the ceremony and Nick Bourq provided music for the reception.
The wedding cake was a four tiered textured cake flavored in ivory butter cream frosting, with pink and ivory peonies flowers. The groom’s cake was a chocolate square camouflage sheet cake with a decorative blue winged teal duck on top flavored in red velvet. The groom’s cake table was inspired by his passion of hunting and the outdoors. The wedding and the groom’s cake was made by Judy Broussard.
The bride is a graduate of St. Joseph Christian Academy. She is a graduate of Louisiana State University at Eunice with an Associate’s Degree in Respiratory Care. She is employed by Abbeville General Hospital.
The groom is a graduate of Kaplan High School. He is employed with Danos and is working for Chevron Aviation.
The couple will reside in Perry, La.