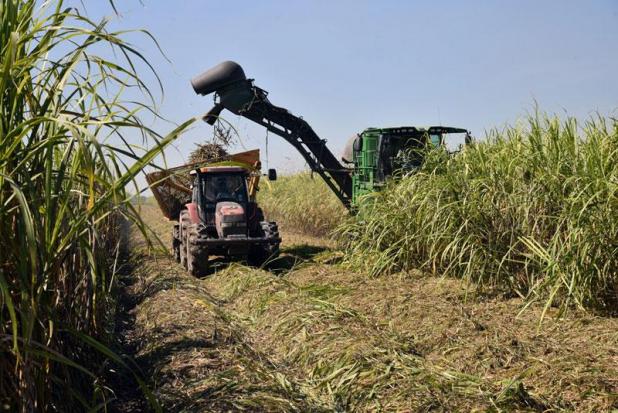 Photo by Bruce Schultz/LSU AgCenter
A harvester cuts sugarcane in a Vermilion Parish field. The amount of cane was down in 2019, but sugar recovery
increased slightly.

CROWLEY — Kenneth Gravois, LSU AgCenter sugarcane specialist, said the muddy 2018 harvest affected the recent sugarcane crop with reduced cane tonnage.
“It was a light crop,” Gravois said. “Anytime you have a muddy harvest in the previous year, you have a hangover effect into the next year.”
The average yield was 30 tons per acre statewide, compared to 39 tons the previous year.
“That was a record tonnage last year,” he said.
The average sugar extraction of 222 pounds of sugar per ton of cane was a slight improvement over last year when the average was 219 pounds, he said.
This crop was below average. And for the most part harvest conditions were dry, and planting was accomplished in good conditions.
“We’re going to be optimistic for next year,” Gravois said.
2019 sugarcane acreage totaled 482,300, compared to 459,000 acres in 2018. Gravois expects acreage to increase for 2020, possibly as much as 490,000 acres, as more land is put into cane production to the west and north.
Blair Hebert, LSU AgCenter agent for sugarcane in the Bayou Teche area, said fields were badly damaged in 2018 during the muddy harvest.
Hurricane Barry damaged the cane worse than was initially thought with the tops of cane plants broken. The early freeze put halted sugar production in the plants, he said.
“This is one of those tough years that Mother Nature didn’t give us much to work with,” Hebert said. “Overall, this is not going to go down as a good-yielding year.”
Hebert credited the breeding programs of the American Sugar Cane League, U.S. Department of Agriculture and the LSU AgCenter for developing cold-tolerant varieties that withstood the freeze.
A hard cold snap would help suppress disease, insects and weeds, he said.
Even though tonnage was down, most farmers were satisfied with the outcome, said Matt Foster, AgCenter agent for sugarcane in Ascension, Assumption, Lafourche, St. Charles, St. James, St. John the Baptist and Terrebonne parishes.
“Some of them wish it could have been a little better,” Foster said.
Last year, he said, acreage went unplanted because of wet conditions. This year the ground also was wet at the start of planting, but farmers managed to get seed cane in the ground.
“Some people were planting and harvesting at the same time,” Foster said.
The muddy harvest of 2018 can be blamed for the tonnage decrease. “I think the cane was trying to recover from the muddy conditions,” he said.