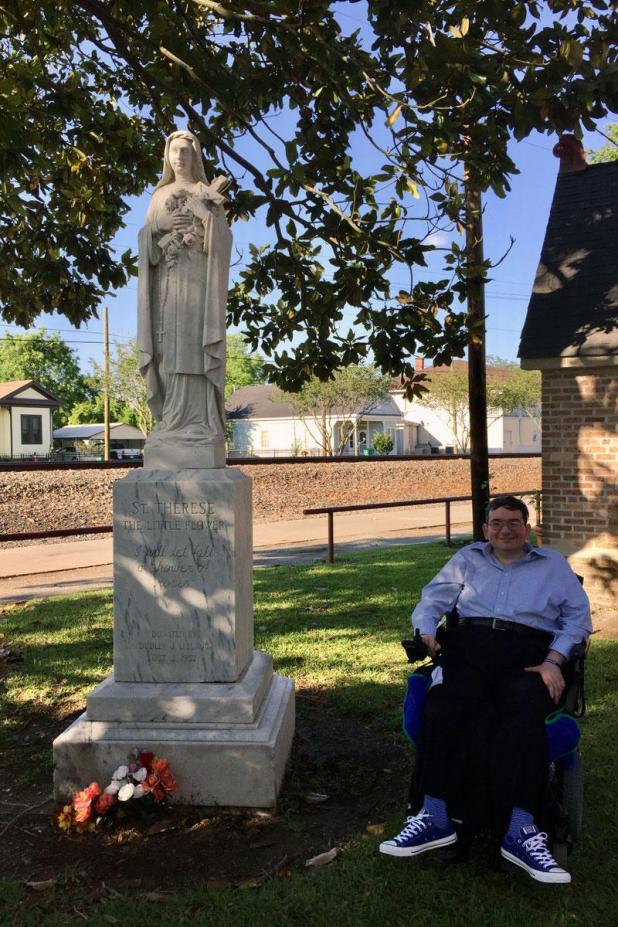 Robert Vincent takes a photo by a St. Therese statue at Sacred Heart Church in Morgan City. He is on a mission to locate as many churches with the same statue. He has located 10 churches, thus far.

On Oct. 3, 1939, Dudley J. LeBlanc donated a St. Theresa statue to St. Mary Magdalen Catholic Church in Abbeville.
That was one of numerous St. Therese statues that LeBlanc, affectionately known as “Coozan Dud,” had donated to churches in Louisiana.
More than 80 years later, Robert Vincent is working to track down all of the statues donated by LeBlanc.
“When the world came to a stop in March with the pandemic,” Vincent said, “I felt now is the time to go find the many statues given by Coozan Dud.
“I was ‘in search of St. Therese.’”
He has located 10 statues at different churches in Louisiana.
For Vincent, the subject of LebBanc, a famous entrepreneur and politician from Vermilion Parish, and the statues is one that piqued his interest 30 years ago.
“When I was 10 years old,” Vincent said, “my mother and I attended a mass at St. Mary Magdalen Catholic Church in Abbeville. I noticed the St. Theresa statue outside and we went to look at it. We read the plaque on the statue saying that it was donated by Dudley J. LeBlanc on October 3, 1939. I questioned my mother about Dudley J. LeBlanc, or “Coozan Dud” as he was affectionately known. My mother told me a little about Coozan Dud and that my great grandmother had worked for him at one time at the HADACOL factory.
“This began my lifelong study of his life and the collecting of any product produced by or advertising related to LeBlanc.”
When the COVID-19 pandemic flipped so much upside down earlier this year, Vincent saw the time as right to ramp up his mission.
Vincent was previously aware of four statues. Along with the one at St. Mary Magdalen, Vincent knew of St. Theresa in Abbeville, St. Anne in Youngsville and Sacred Heart in Morgan City as each having one.
“Over the years, I’d get excited every time I would discover a ‘new’ St. Theresa statue that was donated by LeBlanc,” Vincent said. “I always wanted to know more, but was never able to find any articles explaining the reason why he made the donations or which churches had them. I knew that LeBlanc was a devout Catholic and had donated the land where St. Theresa Catholic Church in Abbeville is located.”
The question about the St. Theresa statues has always stayed in the back of Vincent’s mind. Recently, he decided to ask Morgan LeBlanc what he knew about the statues. Morgan is Dudley J. LeBlanc’s son.
“Morgan was very helpful,” Vincent said. “He contacted his siblings and they told me that their Dad had a devotion to St. Theresa. He always prayed to St. Theresa and asked for her intercession.
“It was this devotion that lead to his generous donations.”
Vincent researched the Abbeville Meridional archives, a book on the history of the Diocese of Lafayette as well as his own LeBlanc collection.
“I was excited to find a prayer card to St. Theresa in my LeBlanc binders,” Vincent said.
In his collection, Vincent also found a program from a Salute to Senator Dudley J. LeBlanc given by Acadian Village on Aug. 16, 1987. This program took place 16 years after his death on his 93rd birthday.
“No ceremony honoring Coozan Dud would be complete,” Vincent said, “without mentioning his devotion to St. Theresa or as he called her in French, ‘St. Therese.’ Included in the program was the following:
“To St. Therese
A special thanks to St. Therese who “let fall from heaven...a shower of roses” creating for Senator Dudley J. LeBlanc a rose petal path to trod.”
As it currently stands, Vincent’s efforts have turned up nearly a dozen churches that have statues of St. Theresa.
“We have been able to locate 10 churches with statues,” Vincent said. This includes churches as far away as Alexandria and Plattenville and stretches across four dioceses.
“At this point, I have no idea how many statues are out there.”
He asked LeBlanc’s family.
“They were unsure when it came to the number of statues and how the churches that have them were selected,” Vincent sad. “They felt it was more than eight, but even the LeBlanc family was unable to provide an exact number.”
Vincent cast a net on social media, to see if anyone had an idea about other churches that may have statues.
“The response has been great,” Vincent said. “People are really excited. I posted on Facebook asking anyone with knowledge of any other statues to contact me. I thought I may get a few responses. To my surprise, the post has been shared 29 times with numerous comments.
“Some people told me they couldn’t tell me where to locate any other statues. They were excited about the project and requested I keep them posted. I even had an aunt and uncle that drove for 6 1/2 hours and over 100 miles looking for statues.
“In that time, they passed by 23 Catholic Churches in three parishes!”
Even if people are aware of the statue’s locations, Vincent said this has drawn interest.
“Most of the donations were done seventy years ago and people don’t know the history,” Vincent said. “I’ve received several messages from people saying they were so happy to learn a little of the history. I look forward to sharing more of the story of the St. Theresa statues as I discover them.
“Until then, my search for St. Theresa continues.”