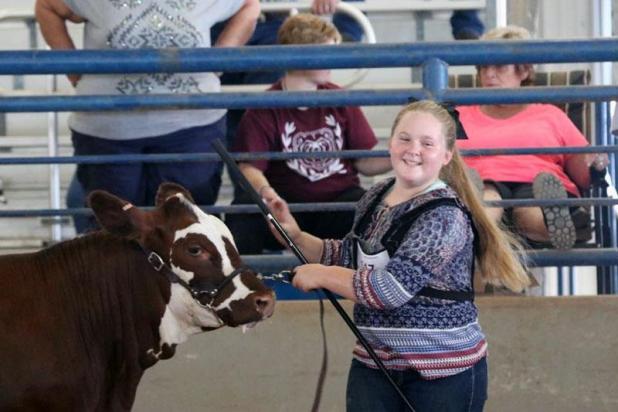 Tayler Guidry, daughter of Bradley and Aimee Guidry, has been selected to serve as the Junior Parade Marshall of the 2019 Louisiana Cattle Festival.
Tayler is from Gueydan and is an 8th grade student at Northside Christian School.
The Cattle Festival’s Grand Parade is set to roll at 1 p.m. on Saturday, Oct. 12.
Tayler is a member at-large in the Vermilion 4-H Program, a member of the National Junior Santa Gertrudis Cattle Association, a member of the National Junior Beefmaster Cattle Breeders, a member of the American Quarter Horse Association, and a member of the Louisiana Junior Cattleman’s Association. Tayler is also a member of the Louisiana Junior Santa Gertrudis Cattle Association where she currently serves as the State Vice President.
Tayler is an active member of the Vermilion Parish 4-H Program. She has been chosen as an Outstanding Club Member for the past two years and has been in the parish-wide top 10 club members for both years. Tayler has participated in the beef project for six successful years. She has competed on parish, district, state, national, and international levels. She has won many awards throughout her 4-H beef career; but out of all of her successes, the awards she is most proud of are the national contests that she has won. Tayler has won the Cattleman’s Contest at the National Junior Show for the past three years and has also exhibited a three-time national class winner heifer. Tayler has dedicated her time and hard work to her many 4-H projects. Through hard work and determination, the seemingly impossible has become possible.
Tayler is also a member of the 4-H Horse program where she has competed on a parish, district, and state level. Tayler along with her ranch sorting partner, Aaron Blackmer, recently won the district and state ranch sorting contests. Being in the horse program has helped Tayler realize that there are many opportunities in 4-H besides cattle projects. She has attended the Acadiana Horse Camp for three years, where she has learned how to improve her riding skills and better understand the needs of her horses. In addition, Tayler won the Junior Public Speaking contest at the State Horse Show over this past summer.
Tayler has participated in many of the contests and projects offered through 4-H. She participates in the various camping opportunities, Achievement Day and contests, Demonstration Day contests, public speaking contests, and project record books. This past year, Tayler’s record books competed very well. She placed 5th overall on the parish level for her age group and 1st in Dairy and 2nd in Beef. Her favorite words while completing record books are “this is boring”, but eventually the hard work pays off.
Tayler’s main hobby is raising and showing her registered Santa Gertrudis, registered Beefmasters, and commercial cross cattle. She also has started a very small commercial dairy cattle herd. Some of her other hobbies include all things 4-H, riding horses, playing the guitar, playing basketball, drawing, and traveling to livestock shows.
Tayler is a hard worker who has realized that hard work, determination, being responsible, and helping others always pays off in the end. She knows that hard work turns you into the best version of yourself.
Tayler is very honored and humbled to be selected as the Junior Parade Marshall of the 2019 Louisiana Cattle Festival. Tayler comes from a long line of cattle producers from the Acadiana area and she hopes to continue the family tradition.