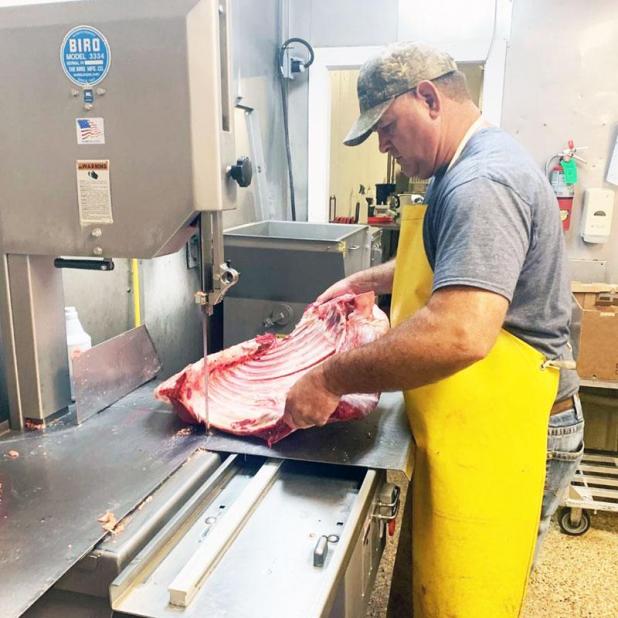 Scott Weaver and his co-workers at Hebert’s Slaughterhouse and Meat Market have been busy during the past few weeks.

Vermilion Parish meat markets have not been this busy since Hurricane Rita, 15 years ago

While the rest of the country is finding it challenging to purchase meat in supermarket chains, there are two businesses in Abbeville whose business has picked up because of the decrease in meat nationally.
Richard’s Meat Market, Hebert’s Slaughterhouse & Meat Market, south of Abbeville, and Hebert’s Specialty Meats in Maurice have seen a spike in business for the last two weeks because of what is happening with the closure of meat processing plants in the United States.
In the supermarkets, many Americans see a limited amount of meat available because hundreds of workers of processing plants are sick from Coronavirus. Outside of Louisiana, there have been nearly 5,000 reported cases of workers with COVID-19 at some 115 meat processing facilities nationwide. At least 20 meatpacking workers have died.
So, while the rest of the nation is panicking in search of pork, beef, and chicken, Cajuns in Vermilion Parish are remaining calm because they know there is an alternative way to buy meat.
Many have begun to head to their local meat market, such as Richard’s , Hebert’s Slaughterhouse and Hebert’s Specialty Meats.
The businesses are doing two and three times more business in the last two weeks. The last time they were this busy was in 2005 when many parish residents lost their meat because of Hurricane Rita.
Chris Hebert and his family were working non stop at Hebert’s Slaughterhouse this past week. He said people were not walking in and buying packs of steaks or pork chops. Instead, they were ordering a half or whole calves and pigs to be butchered and dressed.
Hebert’s Slaughterhouse is one of only four stockyards in South Louisiana that still butcher pigs and cows and then pack the meat for the customer.
“There is no shortage at all,” said Hebert. “Look at the board. We got people bringing us animals to slaughter. There is no shortage at all, in local meat markets.”
Hebert said he could not put the finger on why the run of meat. “Maybe they are scared the local meat markets will run out of meat. That is not going to happen anytime soon.”
One local farmer realized his calves were now in demand. Instead of selling them to a stockyard in Acadiana, he decided to advertise them for sale on the Internet, and within days, they were sold and brought to Hebert’s Slaughterhouse for processing.
Hebert said he recently got a phone call from a farmer in Baton Rouge, who is bringing seven calves to Hebert’s Slaughterhouse to process and then bringing them back to Baton Rouge.
“All of the area slaughterhouses/meat markets are busy,” said Hebert.
Neal Richard is the owner of Richard’s Meat Market, located on 117 Park Avenue. Richard’s Meat Market is not a slaughterhouse, but they do cut and package meat. Neal orders his meat from area stockyards and meatpacking plants in Louisiana.
Like Hebert’s Slaughterhouse, his business has also increased. Neal, said as of today, he is able to keep up with the demand for meat. But he added, that could change in two weeks.
Neal said the best two weeks of his business was right after Hurricane Rita. Since 2005, Neal has been waiting for another meat demand. That time has finally arrived.
“I have been mentally preparing for it since Hurricane Rita,” said Neal.”I figured something was going to happen, but never to this magnitude. Rita was regional. This is nationwide.”
Neal explained that there are plenty of cows, pigs, and chickens to feed America. Where the problem lies is that there are not enough open meatpacking plants. Because of the virus, meat processing capacity is down 40 percent nationwide. Slower lines in the meatpacking plants mean less meat that makes it to markets. It is creating a bottle-neck. Farmers, nationally, are having to euthanize their animals because they can not be processed.
Neal said he recently received a phone call from someone who knew a farmer who wanted to off-load pigs at 50 cents a pound. To get that low price, you had to buy 200 pigs. Neal said, no thanks to that deal.
With there being a shortage of meat at the supermarkets, Neal is seeing new faces walk into his store, asking to purchase meat. He gave one example that one person purchased 50 pounds of ground meat. He also got a phone call from a restaurant owner who was looking for ground meat. Neal was able to find ground meat.
Because of the demand for meat, prices have climbed due to supply and demand.
His meat suppliers are predicting the meat shortage could last two or three weeks.
“This is the first time I have seen this,” said Neal. “I am not stressing over this yet. My biggest concern is keeping up with the customer. Not so much having the product, but just being able to fulfill the order in a timely fashion. So far, we are doing OK.”
Sammy Hebert, owner of Speciality Meats in Maurice, buys his meat from national meat packing plants such as Tyson. The first 10 days of the virus, he noticed a big increase in sales. Then, this past week, because of the slowing down of the meat processing plants, he has run into different issues.
“We got shorted ribeyes this week,” said Sammy Hebert, who said he is ready for the stay-at-home policy to be lifted. “I am not sure how long this will last. I hope it does not go much longer.”
Because of the shortage of beef, his ground meat increased by $2 a pound this past week. Today, ground meat is $2 more a pound than it was two weeks ago. He has not had an issue being supplied chickens.
Hebert said, “I think this is all political that’s going to drive the prices up. There is nothing we can do about it.”