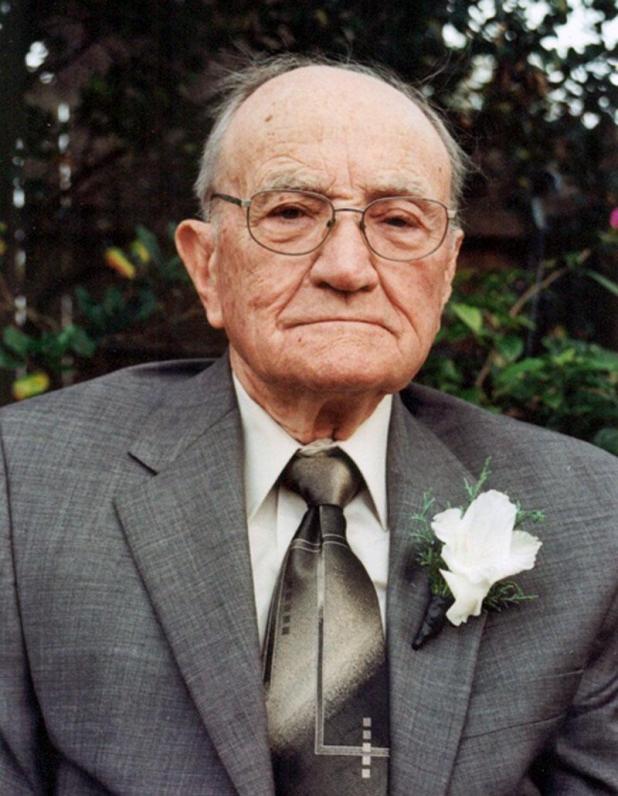 ABBEVILLE — A mass of Christian will be held on Tuesday, April 18, 2017 at 11:00 a.m. at St. Theresa of the Child Jesus Church honoring the life of Isaac Broussard, 97, who died peacefully at home surrounded by family.
He will be laid to rest at St. Mary Magdalen Cemetery with Rev. Louis Richard officiating. Pallbearers include Chad Toups, Jon Isaac Langlinais, Brian Frederick, Jeremy Broussard, Steven Lee, and Haden Isaac Beasley. Scriptures will be read by Denise Orellana. Gift bearers will be granddaughters: Jennifer Broussard, Jamie Rodriguez, Erin Broussard, Lauren Lee, and Emily Corbett.
Mr. Broussard was a kind and gentle man and a loving husband, father, and grandfather who enjoyed spending time with his family. He began his career as a sugarcane farmer in the 1930’s. Later, he and his wife moved to New Iberia to manage a grocery store, then on to Jefferson Island to open a store of their own. After living in Jefferson Island for a number of years, the family moved back to Abbeville where he opened a grocery store across from the old Abbeville High School. Many students remember “Mr. Isaac” from their school days. Finally, he gave up the grocery business to work at Gulf Electric, where he remained until he retired over 30 years later.
Mr. Broussard also served on the building committee of the St. Therese Chapel and served on the Parish council in the early days of the church. He was an usher at St. Therese for over 40 years and enjoyed his yearly retreats at Grand Coteau where he attended over 40 retreats.
He is survived by his four daughters, Beverly Landry and her husband, John; Barbara Frederick and her husband, Harold; and Denise Orellana and her husband, Gus all of Abbeville; Jocelyn Langlinais and her husband, Michael of Youngsville; ten grandchildren, Todd Toups and his wife, Nelia of Brandon, MS, Chad Toups and his wife, Michelle of Lafayette, Brian Frederick and his wife, Keeley of Brandon, MS, Jamie Frederick Rodriguez and her husband, Eric of Youngsville, Emily Frederick Corbett and her husband Stephen of Lufkin, TX, Jennifer Langlinais Broussard and her husband, Jeremy of Youngville, Amy Langlinais Silinsky and her wife Jennifer of New Orleans, Jon Langlinais and his wife, Kasey of Erath, Erin Broussard of Abbeville, and Lauren Broussard Lee and her husband, Steven of Youngsville, as well as 15 great-grandchildren, and a host of nieces and nephews.
He was preceded in death by his wife of 72 years, Annie Mae Haden Broussard; his parents, Noah and Edna Trahan Broussard; one brother, Alton Broussard; four sisters, Alice Boudreaux, Anna Hunt, Hortense Bertrand, and Alta Touchet.
The family would like to extend special thanks to his caregivers who provided such loving and compassionate care in the final years of his life, especially Christina Levine, whose devotion and loving care was always above and beyond the call of duty. Also attending to Mr. Isaac were Martha Antoine, Tresslei Williams, Victoria Harrison, Vera Shelvin, and Carol Campbell, each of whom added joy to his life in her own special way. Also, special thanks to St. Joseph Hospice and their wonderful staff, especially his nurse, Charlotte Aall’jolet for the outstanding care she provided.
The family requests that visiting hours will be observed at Vincent Funeral Home-Abbeville, 209 S. St. Charles Street, on Monday, April 17 from 10:00 a.m. until 9:00 p.m. with a rosary to be prayed at 7:00 p.m. and on Tuesday, April 18 from 9:00 a.m. until 10:45 a.m. when the procession departs for the church.
Condolences may be sent to the family at www.vincentfuneralhome.net.
All funeral arrangements are being conducted by Vincent Funeral Home of Abbeville, (337) 893-4661.