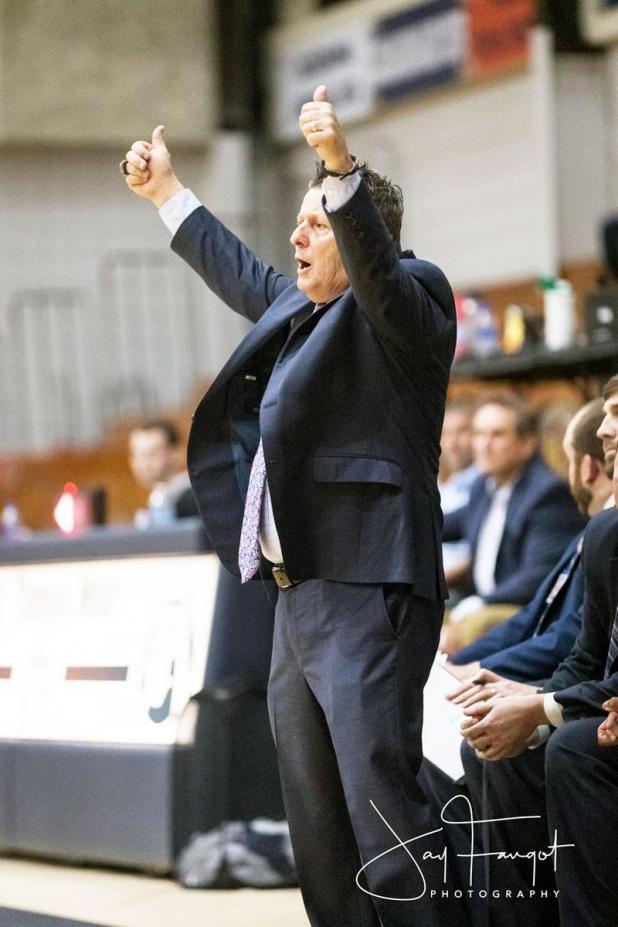 Danny Broussard has been coaching at STM since 1983.
Photo courtesy of Jay Faugot Photography

For 38 years, Danny Broussard has been the head basketball coach at St. Thomas More High School (STM) and has won an incredible 1,049 games.
Broussard, 61, is now the 10th winningest boys high school basketball head coach in the nation.
“All those wins mean I am old as dirt,” said Broussard, who laughed. “It is an honor to be on the list with these legendary coaches.”
Broussard could move into ninth place with six more wins. Morgan Gilbert of Tyronza Bay High School has 1,055 wins and is in ninth place.
If Broussard continues to coach for another five years and averages 20 wins a season, he could become the fourth all-time winningest high school basketball coach in the country.
The winningest high school coach is Robert Huges (1,333 wins) from Forth Worth, Texas. Broussard is 295 wins away from catching Huges. Broussard would need to win an average of 29 games over the next 10 years to catch him.
“It is going to be tough to catch him,” said Broussard. “How long am I going to keep coaching? As long as I continue to have fun and my health holds up. I am not going stay coaching so I can get wins and to move up in the ranks.”
Over the last 38 years, he has coached against four of the coaches on the all-time high school coaches list.
As of today, Broussard ranks as the third-winningest boys basketball coach in Louisiana.
The Louisiana winningest boys basketball coach is Peabody head coach Charles Smith (1,075 wins) and Joel Hawkins at Southern in Baton Rouge is second.
Broussard took over the head coaching job at St. Thomas More in 1983. He replaced his brother, Rickey Broussard, who accepted an assistant coaching job at USL (Now UL-Lafayette). Three years later, Broussard coached STM to a state championship. STM won state titles in 1986, 2013, 2018, 2019 and 2020 under Broussard.
STM has appeared in the “Final Four” 15 times.
In 38 years, Broussard has only had one losing season.
Broussard’s teams win an average of 27.5 games a year.
Growing up in the Meaux community, basketball was the sport of choice. Broussard played sports year round. As a player, he helped bring Meaux High to the Class C state championship game in 1977, with his brother, Kim, as the head coach.
Rickey Broussard encouraged him to get involved in coaching. When he was 15 years old, Danny was coaching the fourth and fifth graders at Meaux.
When St. Thomas More opened in the early 1980s, Rickey offered Danny an assistant coaching job fresh out of college. With a baby face, many thought Danny was a student instead of a coach.
By the end of 1989, Danny Broussard had taken St. Thomas More to three Top-28 appearances in four years, adequately cementing his place at St. Thomas More.
Growing up in the Meaux community, basketball and baseball were Broussard’s passions.
Looking back, Broussard said he took a little away from all the men who coached him.
His older brother, Rickey, coached him at Meaux High during his freshman and sophomore years. In his final two years, Frank Hardy was the head coach.
He said Rickey and Hardy had different styles of coaching techniques. Rickey was tough, and Hardy was more laid back. Then there was Cordell Dartez, who was the assistant coach.
“They were all great men who I took a little bit from everyone,” he added.
Basketball coaches were not the only coaches who influenced him. He credits his baseball coaches, who were helping him become a great coach.
Bob Trahan and Tommie Picard were two baseball coaches who had a major influence on him. Trahan preached to his players to know baseball’s fundamentals, while Picard showed him how to have passion for the sport he coaches.
Broussard also credits his wife, Deanna and their three children for supporting him for all of these years.
“Family support is a big reason why I have been successful,” he said. “My wife has been great and has supported me throughout my coaching career. I could not have been successful without her.”
Broussard is the son of the late Flordra and Ervy Broussard.