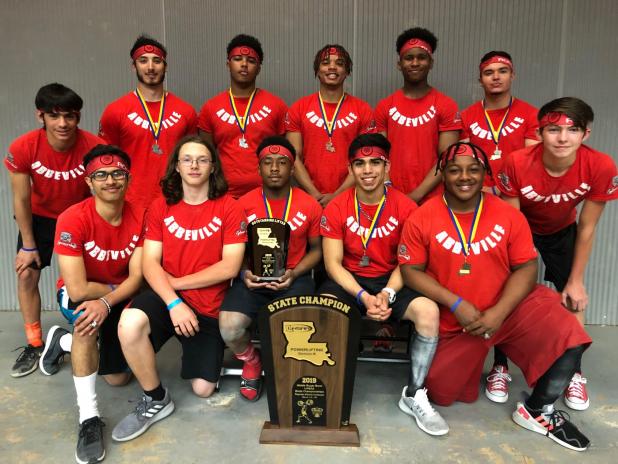 The Abbeville boys are the co-champs of the state meet. 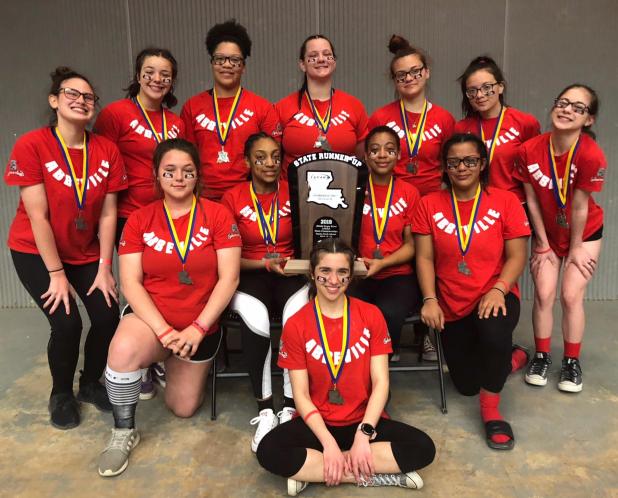 The Abbeville girls had to settle for second place after finishing in a two-way tie for first place with Peabody High. AHS lost the state title on a tie breaker rule.

Abbeville head powerlifting coach Travis Werner cannot ask for a better finish from his two teams.
The Abbeville Wildcats and the Lady Wildcats finished in first place, however, tied with two other teams at the Division III State Powerlifting Meet.
In powerlifting, there are tiebreaker rules that help break the tie.
When the tiebreaker rules were applied, the Lady Wildcats finished in second place, and the Wildcats finished still tied for first place with Church Point.
Last year the Wildcats won the title outright, winning by two points.
It is the third year in a row the Wildcats win the state powerlifting title.
This year, after the lifting was over and points counted, AHS was tied with Church Point, 41-41. Then comes the title breaker rules.
Both schools had three first places, three-second places, two thirds, and one fourth-place finish.
After five tiebreaker rules were applied, the two schools were still tied. So, the LHSAA awarded both schools the state title.
However, later that Thursday night, AHS Powerlifting Coach Travis Werner learned there was a “last resort” tiebreaker rule that was not applied when trying to break the tie. If the LHSAA applied the final tie-breaker rule, it would have given Abbeville the outright title.
“The competition was nothing short of exhilarating,” said Werner. “As I explained to our athletes, the joy is in the preparation, not the outcome. Whether they finished in first place or last, they’d spent an entire year working passionately toward a goal with one another. The countless hours spent in the weight room and the friendships they made along the way are the real prizes. I couldn’t be prouder of our teams.”
AHS had three boys state champions. They were Chuck Shuford, Alvaro Lopez, and Jerimya Overton.
Shuford won the Division III Lightweight lifter. The 123 pound-Shuford benched 300 pounds, deadlifted 515 pounds and squatted 485 pounds for a total lift of 1,300 pounds. His total of 1,300 pounds were composite state records.
Members of the state winning weight lifting team are Raj Patel, Phillip McCoy, Chuck Shuford, Christian Alvarez, Jason Alvarez, Addison Gaspard, Marlon Coco, Deion Williams, Dontae Dunaway, Alvaro Lopez., Ian Grouvillia and Jerimyah Overton.

The lead exchanged six times in the final 30 minutes of the girls’ competition and came down to the last deadlift of the meet.
The Lady Wildcats finished tied with Peabody 46-46.
The first tiebreaker rule, who has the most first place finishes, was applied.
Peabody had more first places than Abbeville, thus, giving Peabody the state title.
Last year the Lady Wildcats finished second to Peabody, but by 20 points.
This is the third year in a row the Abbeville girls finish second at the state meet.
“That is not disappointing to me,” Werner said. “I consider that to be a tremendous success and have enjoyed every minute of the journey. I’m confident that I speak for all 12 of our boys and all 12 of our girls when I say that it was a pleasure to prepare and compete together.
“Not every lesson learned is learned in the classroom. Just as many are learned in athletics. We coaches are confident that we’ll be sending our graduating seniors out into the world as better adults than they would have been otherwise, whether they’ll be wearing a state championship ring or not
The Lady Wildcats did have four individual state winners.
Shaye Roberston won the 97-pound weight class.
Briana Tomino won the 105-pound weight class.
Hanna Barnette won the 181-pound weight class.
Jayla Reaux won the 220-pound weight class.
Members of the state second place team are Evony Thurman, Destani Longman, Hannah Smith, Jayla Reaux, NyGene Williams, Lainey Trahan, Makayla Jones, Hannah Barnett, Aaliyah Coco, Franchesca Regalado, Shaye Robertson.