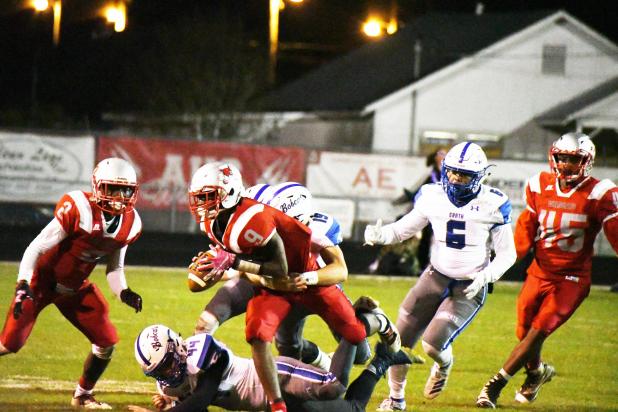 Abbeville's Garrick Scott (9) catches one of his four passes for the Wildcats.

The Erath Bobcats escaped the Wildcat Stadium with a 24-22 win and a piece of the District 6 3-A football title.
The Bobcats, St. Martinville, and the Kaplan Pirates share the title with a 3-1 district. A piece of a district title still counts as a district title. Football district titles do not come around too often at Erath High. Before Friday’s win, Erath had only won five district titles (1958, 1959, 1962, 1963 and 1998). It’s been 21 years since their last district title in 1998. None of the Bobcat players were born the last time Erath won a football district title.
“These guys have put together a great year,” said EHS head coach Eric LeBlanc. “Winning the title means a lot to these kids, as well as to the community and the fans. To end the regular season 5-5 and move on to the playoffs is great.”
The Abbeville Wildcats (1-9) made the game enjoyable in the fourth quarter.
For three quarters, the Bobcats played in cruise control and led 21-0 heading into the fourth quarter. But then, the game got turned around on one play.
On a punt, Abbeville’s return man, Brendan Shelvin fielded the punt and darted 85 yards down the right sideline for a touchdown, which seemed to have sparked new life into Abbeville.
On Erath’s next possession, EHS sophomore starting quarterback Ryan Richard was intercepted by AHS linebacker Christian Alvarez. Alvarez, who had a wrapped broken hand, was able to catch the ball with one hand and head 57 yards up field for a touchdown.
In 30 seconds, the Wildcats went from being down 21-0 to only being down 21-14 with still 10 minutes to play.
Instead of throwing, the Bobcats kept the ball on the ground to run time off the clock. Before the time-killing drive, Jax Thibodeaux had only 29-yards on seven carries in the game. The drive took six minutes off the clock, and Thibodeaux ran for 46-yards on six carries.
Field goal kicker Colton Punch nailed a 20-yard field goal to put EHS up by 10, 24-14, with three minutes to play in the game.
The Wildcats did not quit and marched downfield and scored. The big play on the drive was a 26-yard pass play from quarterback Jaidyn O’Brien to Connor Garret on a fourth-down conversion. Abbeville scored when O’Brien connected with Derrian Harrison on an 11-yard TD play. A missed two-point pass play made the score 24-20 with 1:35 to play in the game.
The Bobcats were able to run out the clock. With 13 seconds left, Colton Punch got the hand off and ran around the field and headed to Abbeville’s end zone for a safety, making it 24-22, with three seconds to play in the game.
“Yes, I am glad to leave here with a win,” said LeBlanc. “Abbeville always gives us a great game. Tonight was the same.”

EHS sophomore quarterback Ryan Richard would have made New Orleans Saints backup quarterback Teddy Bridgewater proud on Friday night. In Richard’s first varsity start, he completed 14-out-of-28 passes for 201 yards. Before Friday, Richard has only completed one pass for eight yards.
Richard played in place of the injured QB Luke LeBlanc, who did not dress out on Friday. There is no guarantee LeBlanc will be ready for Erath’s first-round playoff game.
Colton Punch, who is the field goal kicker and punter, also had seven catches for 158 yards,a touchdown and a 20-yard field goal.
Abbeville High scored a season-high 22 points against EHS.
For the first time this season, Abbeville had success throwing the football. O’Brien completed 12 out of 24 passes for a season-high 121 yards and a touchdown.
Garrett had three catches for 22 yards and Garrick Scott had five catches for 90 yards.