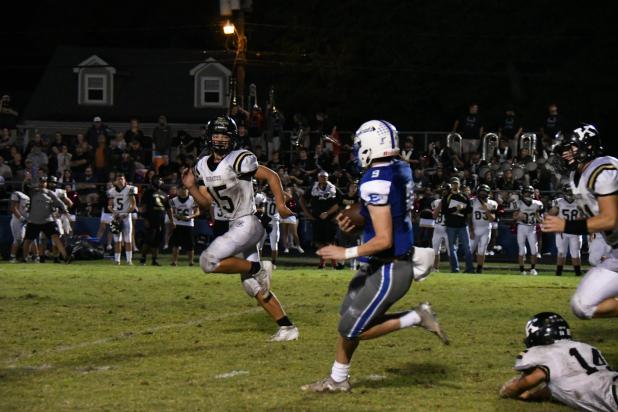 Erath quarterback Luke LeBlanc (9) runs down field and is about to be tackled by safety Mason Frick.

Erath gets rare victory over Kaplan

ERATH - The Erath Bobcats were able to put an end to two streaks the Kaplan Pirates had over the boys from Erath.
With the 20-12 win over Kaplan on Friday, the Bobcats ended Kaplan's 20-game district winning streak that dates back to 2015.
The other streak to end was the dominance Kaplan had over Erath the last 12 years. The previous time Erath beat Kaplan was in 2007 under then-head coach Jacob Byler.
Erath senior quarterback Luke LeBlanc, who rushed for 124 yards and scored two touchdowns, was around six years old the last time Erath beat Kaplan in 2007.
"To beat Kaplan means everything," said LeBlanc. "I have had a chip on my shoulder when it comes to Kaplan. Kaplan has been good for the last three years, so to finally beat them is great. Tonight the alumni were coming to us and saying how happy they are because we beat Kaplan."
The Pirates have now dropped four straight after winning the first two games. The Bobcats, who were on a two-game losing streak, were able to bounce back from last week's loss to VC and play one of their best games of the season.
"We showed up and played Erath football tonight," said EHS head coach Eric LeBlanc, who was a player on the team that beat Kaplan in 2007. "We made a lot of mistakes in the last two games. Against VC we had five turnovers and the week before we had three. Then we play a good Kaplan team and play well. It is good to see."
The Bobcats were down 12-6 at halftime but were able to take to advantage of a 15-mile per hour wind at their back. The Pirates punted into the wind twice, and the ball hung up in the air but only traveled 10 yards. One short punt gave Erath the ball at the Kaplan 35-yard-line. They took advantage of the short field and scored. LeBlanc had two runs of 15 yards and a 13-yard touchdown run on the drive. The score put Erath up 13-12, with 39 seconds left in the third period.
Late in the fourth period, the Bobcats were marching and eating up the clock. On first down at the KHS 26 with 1:44 to play in the game, Erath fullback Curtis Cormier ran through a large hole up the middle for a touchdown. Colton Punch kicked the extra point and put Erath up 20-12.
What the touchdown did was give Kaplan the football with 1:40 to play in the game.
The Pirates, starting at their 34-yard line, needed eight points to tie the game. On the first down play, Kaplan quarterback Mason Frick threw a deep pass down the middle. EHS free safety Andrew Evans intercepted it. His interception gave EHS the ball back, and Kaplan could not stop the clock because it had no time outs.
"I did not think I would catch it," said Evans. "I thought it would go over my head. I just went up and grabbed the football."
After seeing Evans come down with the football, Coach LeBlan ran onto the field and told Evans his interception just won EHS the game
"This was a big win for us," said a happy EHS head coach.

Statistics from the game: