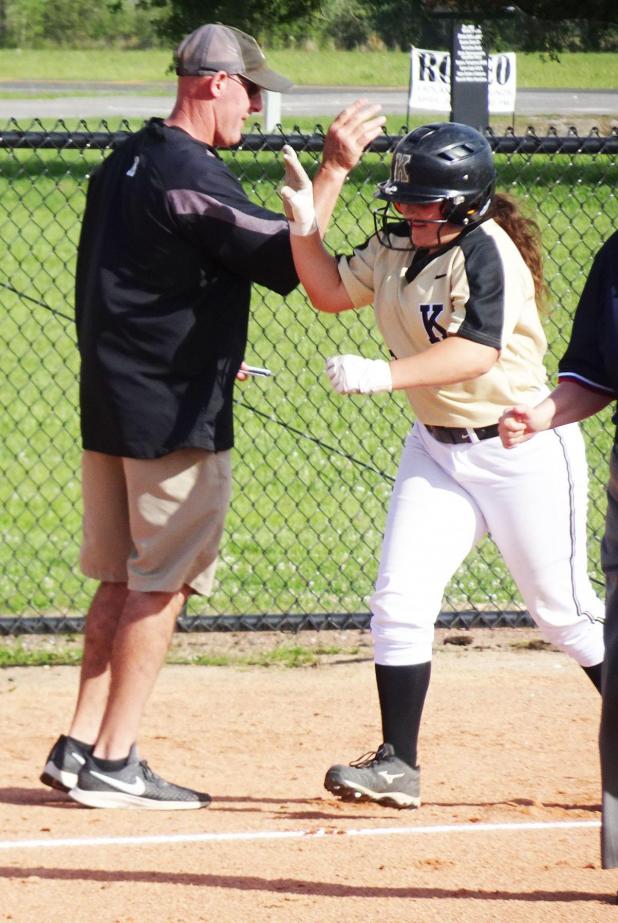 KAPLAN - The Kaplan Lady Pirates scored 14 runs in the first inning against Avoyelles in the Class 3A first round playoff game on Thursday.
When the game was over, after only three innings, the Lady Pirates won 18-0 with the help of 15 hits.
The Lady Pirates are back in action on Tuesday for a second round game against No. 12 Pine Praire. The game starts at 6 p.m.
Pine Praire sports a 19-11 record. Earlier in the year they lost to North Vermilion 7-6.
The winner of that game plays the winner of the No. 4 Crowley/No. 20 Church Point game later this week.
The Lady Pirates did their damage in the first inning when 20 Lady Pirates went to the plate.
One of the big blows in the inning was a three-run home run by Molly Sistrunk that made the score 6-0.
After the home run, Kaplan ripped off five straight singles in a row still in the first inning.
With singles were Lauryn Labry, Kinley Duhon, Meryl Guidry, Carina Chargois and L. Packard that made the score 9-0.
Batting for the second time in the inning, Sistrunk hit a 2-RBI single for a convincing 13-0.
Sistrunk finished the game with three hits and she knocked in five runs.
Kailey Hebert also had three hits and she brought home four runs and scored twice.
Packard and Guidry each had two hits.
Chargois got the win on the hill. She gave up only two hits.

The Erath Lady Bobcats are moving on to the second round of the Class 3A playoffs after crushing No. 27 seed Carroll, 21-0.
The No. 6 seed Lady Bobcats will play No. 11 Albany on Tuesday in Erath. Gametime is set for 5:30 p.m.
The winner of that game will play the winner of No. 3 Caldwell Parish/No. 14 Jena game.
Albany enters the game winners of seven of its last eight games.
On Thursday, the Lady Bobcats set the tone early by scoring 16 runs in the first inning.
The game only lasted three innings.
Erath freshman Aubrey Desormeaux helped score 16 runs with a 3-run home run.
The Lady Bobcats batted around twice in the first inning. Everyone in the starting line up scored a run.
The Lady Bobcats had nine hits in the inning. Jacee Gainer had a double in the first frame.
EHS pitcher Lexi Gisclair pitched the minimum three innings and struck out six and did not walk any.