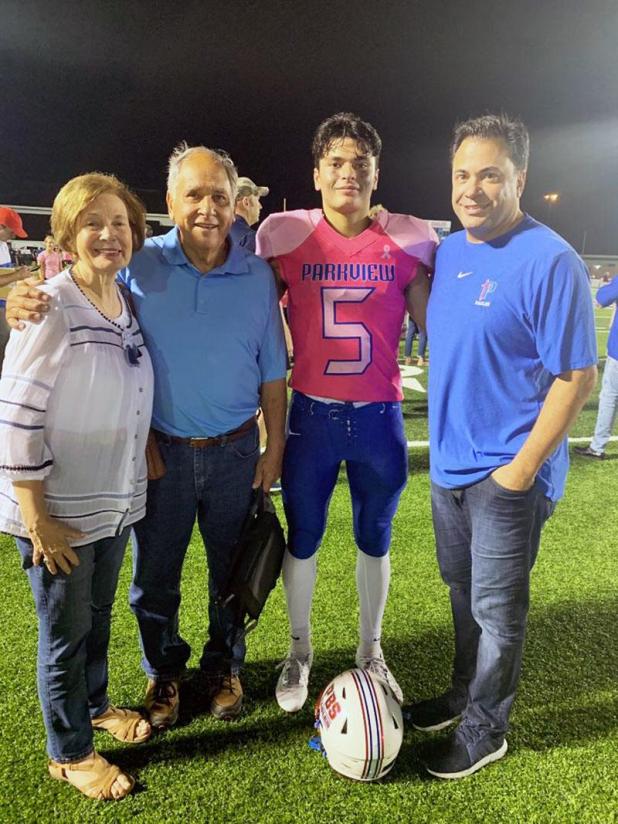 On Thursday, there was a high school senior from Parkview Baptist High School in Baton Rouge, who verbally committed to play football for the United States Air Force Academy. Why would anyone from Vermilion Parish care? Because of his last name - Mula.
While there is probably only one Mula family who lives in Vermilion Parish, that one family has made its mark in the parish thanks to athletics.
J.Y. Mula and his wife Elaine migrated to Vermilion Parish when J.Y. got a teaching job in Vermilion Parish’s public school system. He had just spent his college days playing football and baseball for USL (now UL-Lafayette). He played quarterback for USL.
The Mulas remained in the parish and had five children, three sons and two daughters. The three sons were good athletes who played sports at Abbeville High School. Two signed athletic scholarships. Mitch signed a basketball scholarship with Northwestern State, while Jared signed a baseball scholarship with LSU.
Mitch eventually left Northwestern State and finished his degree at LSU. It was at LSU he met his future wife, Candace.
The two have been married close to 20 years and have two children while living in Baton Rouge. Their 17-year-old son, Roman, could be the best athlete from the Mula family, yet.
The 6-foot-1 Roman is about to enter his senior season at Parkview Baptist. He has started at quarterback for the last two seasons and is considered a three-star recruit. Last football season, Roman took to the challenge passing for an estimated stat line of 950 yards with 17 touchdowns and rushed for 500 more with 10 trips into the end zone.
Mitch admits his son, who has never seen video of his father playing quarterback for the Wildcats in the late 1980s, is a better athlete. Roman runs a 40-yard dash in 4.6 seconds. Mitch said Roman gets his speed from his wife’s side of the family.
“I never could run fast,” admitted Mitch.
On Thursday, Roman announced that he wants to serve his country by going to play quarterback for the Air Force Academy. Air Force finished last season ranked at No. 22 in the country.
Roman also had a scholarship offer from Southern University and was also looked at by La Tech, Florida Atlantic and Lamar.
He went with the Air Force Academy because of the future that lies ahead after playing football. The Air Force Academy trains young adults on how to be officers in the United States Air Force. After graduating, Roman will have to serve five more years in the Air Force Academy as an officer.
“I chose the Air Force Academy because of life after football, the benefits of graduating from a school like that are countless,” said Roman. “I also wanted to play football at the highest level I could, and considering that they were ranked number 22 in the nation last year, I would say that’s pretty elite.
“I also loved the coaching staff. Every coach on the staff has texted me or called me at one point in time and told me how I would fit in, and how they think I could lead the team to success. They were super excited about my commitment. They have been a big factor in my decision. The serving part of the offer, in my opinion, is a plus. Saying that you served your country in any way is a huge honor.”
The Air Force Academy is located in Colorado Springs, Colorado, which is 18 hours away from Baton Rouge. For the last eight years, the Mula family had to drive less than 30 minutes to watch Roman play football.
When Roman moves away, it is going to be Mitch who is going to go into withdrawal because he is losing a son, as well as a best friend.
“Daddy is going to have a tough time,” Mitch said about his son being 18 hours away. “It will be hard, but I know he will be a better man once he leaves. I am so proud of him.”
Mitch and Roman have a unique father-son bond. All three Mula boys were close to their father, J.Y., and that bond carried on to Mitch and Roman.
“My dad has been with me throughout all of this,” said Roman. “I will forever be grateful for the countless things he has brought me to, helped me with, and given me advice on. I’m thankful that we have such a great relationship and have shared so many memories throughout my football journey. None of this would have been possible without him.”