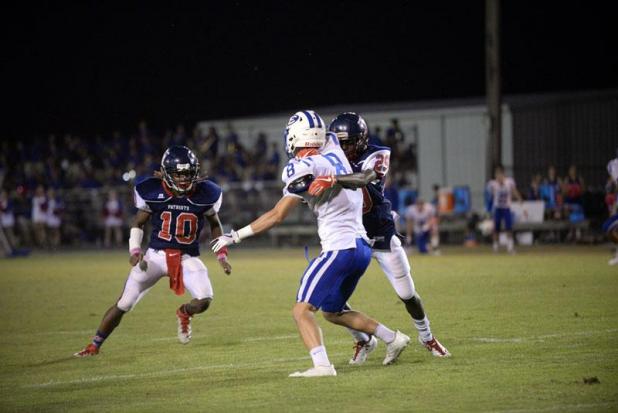 LEROY – The North Vermilion Patriots are sitting pretty. Just don't expect them to rest on their laurels. There's simply too much left to accomplish.
Coach Richard Prejean's squad rebounded from last week's narrow loss to Patterson with a resounding 34-0 victory over winless Vermilion Parish rival Erath on Friday, improving to 5-2 on the year.
It was the kind of performance every coach wants to see in answer to adversity.
“Every week is a step in our development,” Prejean said. “The kids were angry after the loss last week, and they were focused on getting better. I told them to win the game Monday through Thursday at practice.
“I like where we're sitting, to be 5-2 at this point. We've got some kids who've been banged up, that we're getting off IR (injured reserve). These players handled losing last year, when we played a lot of young kids. They went through great pains to figure it out.
“There's a level of maturity on this team that I like.”
What's not to like about a 34-0 win over a rival? Junior quarterback Garrett Becker said the seeds were sown during the week.
“It was a tough loss last week,” he said. “But we practiced hard all week and came back from it tonight. Erath is always a good opponent and it was easy to focus.”
When a team is winning, big plays seem to pop up at perfect times. Struggling teams, in turn, can't seem to find the key.
NVHS took a 7-0 lead in the second quarter on a 5-yard run by Malik Criner, two plays after the EHS punter couldn't handle the snap and was swarmed under at his 19.
It was 14-0 at half, thanks to a Bobcat fumble at the visitors' 43. Criner appeared to score on a 41-yard run, but a penalty wiped it out. Undaunted, he rambled for 40 to the EHS 16 on the next snap to set up Creed Rudd's 16-yard TD.
Erath attempted to cut the lead to start the third period behind Cameron Landry, but was halted by another fumble at the Patriots' 24.
Becker soon capped a 76-yard drive to make it 20-0 when he bobbled a shotgun snap, recovered it, escaped and finally high-stepped it in to finish off a 40-yard TD and effectively bury the luckless visitors.
Other North Vermilion scores came on Kade Hebert's 26-yard blocked punt return and a 5-yard run by Rudd.
Criner led the win, as usual, with 111 yards, but there were plenty of standouts.
“They did something different to load up the box and stop Malik,” Prejean said. “We had to adjust to that. But, we've also got plenty of other guys who are overlooked but can make plays for us.”
Landry hit 13-of-30 passes for 190 yards in defeat before being relieved by Luke LeBlanc, but the Bobcats were clearly overmatched in falling to 0-7.
“It's very different than last year,” Becker said. “We've got numbers across the board. Nobody has to play both sides of the ball. We've got athletes all over the field. My role is to keep them up, keep us grinding it down the field, keep us moving.”
Abbeville is next up, and Becker has a plan.
“We need to keep playing our game,” he said. “We want to improve as a team, make the playoffs, go as hard as we can and see how far we can go.”
That doesn't sound like a satisfied team. Not yet.
“We didn't execute 100 percent tonight,” Prejean said. “There are still things we need to work on to get better.”