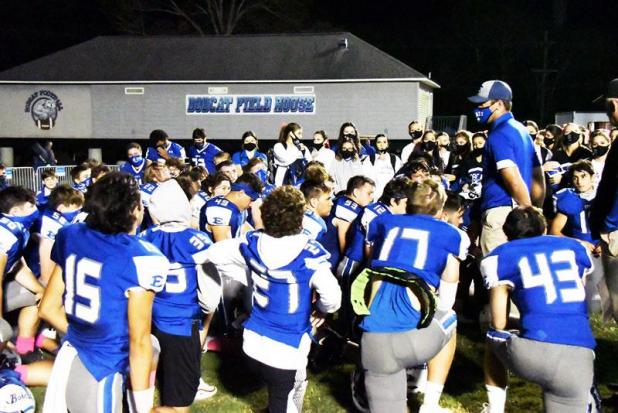 Erath head coach Eric LeBlanc, shown talking to his team after playing a game earlier in the season, informed his players that the Bobcats made the playoffs despite not playing in the final two games of the season.

Surprise, surprise: Erath one of five teams in playoffs

It has been a strange high school football regular season, and now it is about to be a peculiar playoffs.
On Sunday, the LHSAA announced the playoff pairings based on power points.
The parish has five teams that landed in the LHSAA playoffs.
It was a no brainer that VC, Kaplan, Abbeville, and Delcambre were getting in. But the big shocker was Erath squeaking in despite not playing a football game in two weeks.
Due to COVID-19, Erath could not play its final two games because of contact tracing. When they learned they could not play the final two games, they thought their season was over. Erath was ranked No. 37 with two games remaining.
When the LHSAA announced who made the playoffs, Erath landed at No. 32. The Bobcats take on No. 1 Jennings on the road.
EHS head coach Eric LeBlanc received a tip from another high school coach earlier in the week that there was a chance that the Bobcats could crawl into the Top 32. The coach wanted to know if the Bobcats play in the playoffs if they reach the top 32.
Coach LeBlanc told the high school coach if the Bobcats made the playoffs, they would play.
It became official Sunday morning that the Bobcats were in.
They play No. 1 Jennings Saturday at 5 p.m.
The game is Saturday because the Bobcats have not practiced since the COVID quarantine. Their quarantine will end on Thursday. Until Thursday, the team or coaches can not get together.
They will meet Thursday for the first time in 14 days to begin preparing for Jennings on Thursday and Friday.
LeBlanc said he asked the head coach at Jennings if the game could be pushed back one day for his team to have an extra day of practice. The two coaches agreed.
“We are excited to make the playoffs,” said LeBlanc.

The Abbeville Wildcats (3-4) are back in the playoffs for the first time in five years.
In his first year, AHS head coach Roderick Moy guided the Wildcats to their highest seed in the Class 3A playoffs in 10 years.
In 10 years, the Wildcats have made the playoffs three times, counting this year.
In 2010, Abbeville was the No. 29 seed and played Patterson.
In 2015, Abbeville was the No. 29 seed and played Crowley,
This year, Abbeville is No. 28 and is playing No. 5 St. James.
Moy said, “This is the first step. It was a great feeling to be able to extend our season when at first, playing any game this season, seemed like a long shot.”

The VC Eagles (6-0) are the No. 2 seed and will play on Friday against No. 15 St. Frederick in Eagle Stadium.
The two teams played against each other in 2018 in the second round of the playoffs, with VC winning 50-0.
This will be VC head coach Broc Prejean’s first playoff game as a head coach.
‘We have a tough opponent in St. Frederick’s and we are looking forward to a fun match up. Very happy that our guys earned an opportunity to control their own fate on our home field. We will get to work on Monday and prepare accordingly,’ said Prejean.

The Kaplan Pirates (4-3) will be on the road but won’t have to travel too far. The Pirates, who are ranked No. 23, will play No. 23 St. Martinville on the road. St. Martinville is a district team and beat the Pirates earlier this month.
Kaplan head coach Stephan Lotief has another worry going into the game. In Friday’s win over Lake Arthur, some players were missing due to contact tracing from COVID-19. There were about 30 players who made the trip to Lake Arthur.
For the first round, Lotief said he expects at least seven starters to miss the game due to contract tracing.
“As coaches, we will figure it out and do our best,” said Lotief.