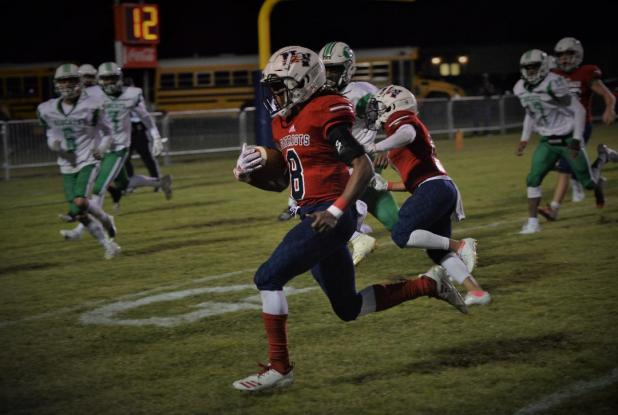 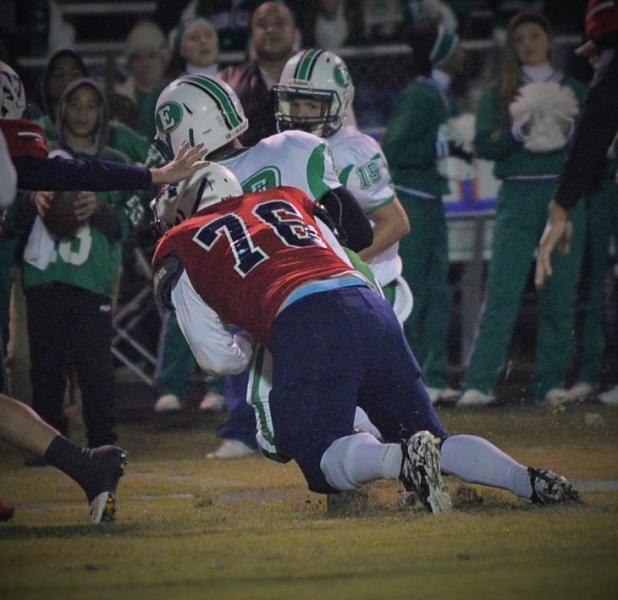 LEROY – The North Vermilion Patriots would like to make a habit of state playoff action.
They wouldn’t mind achieving the consistency enjoyed by the Eunice Bobcats, last year’s LHSAA Class 3A champions and a 4A hopeful this season.
What they got instead on Friday night was a lesson in just how quickly opportunity can slip away.
The Patriots served up four turnovers – all of which were turned into opposing touchdowns – to pave the way to a 57-19 home loss to Eunice.
On the one time in the first half they didn’t give the ball away, NVHS put together a 15-play, 70-yard TD drive. But that only closed the gap to 29-7, Bobcats, who were in turn ahead 36-7 at half.
“I think we can play with them if we don’t turn it over,” said a frustrated but undaunted NVHS coach Brett Blakey. “You can’t turn the ball over like that against a good team, and Eunice is a great team. I think they’re a quarterfinal team.”
Eunice improved to 7-2 overall and 3-1 in District 4-4A, while North Vermilion lost a chance to win the district, slipping to 5-4, 2-2, with a challenging final up next at St. Thomas More.
“I think we’re in (the playoffs),” Blakey said. “We’ve got 5 wins. We bead Ascension Episcopal, which has 8, and Rayne (27-0). If we can win next week, we could get a home playoff game. That would be good.”
Blakey heaped praise on his offense, which had scoring dives of 70, 57 and 67 yards in defeat.
“I like the way we moved the ball,” he said. “We only punted once, and that was late in the game. Our offensive line is looking good, after we grabbed three guys (tight end, linebacker, defensive lineman) early in the season who had never played there and threw them in there.
“They have done well.”
But those turnovers, Ugh.
“We couldn’t even get a minute on the sidelines to go over some things they were doing on offense,” Blakey said. “We’d start to talk, and then it was ‘get back out there,”
“The turnovers obviously helped,” said Eunice coach Paul Trosclair, “but our offene is reallu playng at a high level right now.”
Eunice was led by twis, quarterback Simeon Ardoin (14-of-15, 171 yards, 4 TD passing, 7-105-1 rushing) and tailback Deon Ardoin (21-182-3).
Kendrick Beaudoin scored twice from 1 and 7 yards, while quarteback Darius Gilliam had a 12-yard score.
The climb to Class 4A is a challenging one. Doing so while handing out party favors will make the journey a painful one.