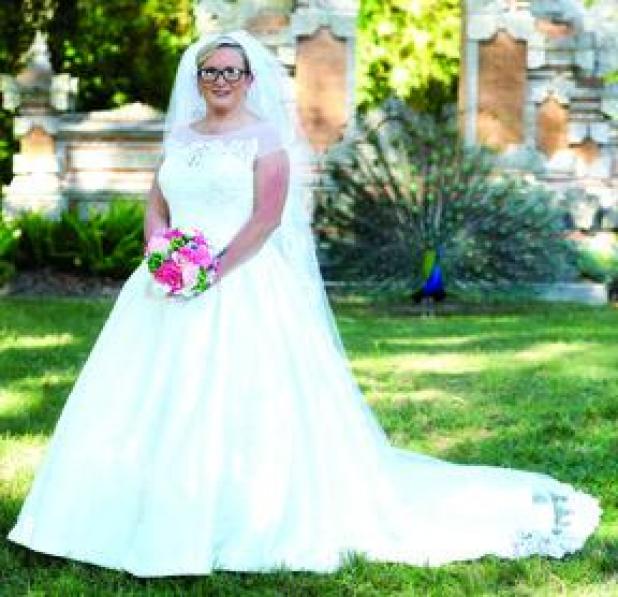 Miss Heather Moore and Mr. Joseph Vincent of Lake Charles were joined in marriage during a ceremony held on Thursday, June 8, 2017, at the historic Episcopal Church of the Epiphany in downtown New Iberia.
Reverend John “Jack” Myers of the Episcopal Church of the Good Shepard in Lake Charles was the celebrant of the five o’clock ceremony.
The bride is the daughter of the late David Moore. Parents of the groom are Douglas and Jackie Vincent of Erath. His grandparents are the late Mr. and Mrs. Robert LaBauve of Morgan City, and the late Mr. and Mrs. C. B. Vincent of Henry.
Escorted by her brother, Josh Moore, the bride wore an Oleg Cassini elegant Mikado gown, which was inspired by Grace Kelly. Romantic and feminine, this candlelight gown featured symmetrical scroll lace appliques, an illusion neckline, and a sweeping chapel length train. The back of the gown featured illusion lace which was accented with delicately beaded scalloped lace and covered buttons.
In keeping with tradition of “something old,” the bride wore a scalloped lace edge cathedral length veil with beaded detail down the sides. The veil was worn by the groom’s mother on her wedding day. She also carried Joseph’s mother’s handkerchief that was monogrammed with a blue “V” as her “something blue.” Her “something borrowed” was a beautiful vintage lace ring bearer pillow from the groom’s aunt, Mary Reggie. Her wedding dress was her “something new”. Heather placed in her shoe a 1950 sixpence which is a symbol of “wealth” of joy and happiness. The veil, the handkerchief, and the sixpence were all proudly used by the bride’s mother-in-law at her wedding 45 years ago.
The bride carried a bouquet of light pink roses, pink peonies, light pink carnations, green hypericum, blue thistle set in white hydrangeas, all hand tied with white satin ribbons. The bride’s bouquet, as well as all the flower creations, was hand crafted by her exceptionally talented friend, George Joseph Vander Hey.
Rena A. Kennedy, close friend of the bride, served as matron of honor. Bridesmaids also included Shakara Charles, Morgan Abshire and Kayla Abshire. The bridesmaids wore floor length gowns, each in their individual styles, in a palette of ballet pink. They carried bouquets of a smaller version of the bridal bouquet.
The bride’s niece, Taylor Moore, daughter of Josh Moore, served as flower girl. She wore a white lace dress, trimmed in ballet pink. She carried a pomander of blue thistle held together delicately with a satin ribbon.
Robert B. Vincent, brother of the groom, served as best man. Groomsmen included Jonathan Melancon, Christopher Reggie (cousins of the groom) and Ben House Bonin (longtime friend of the groom.) Serving as ushers were the groom’s friends Scott Daigle, Garran Saxby, and Matt Holland. The godchild of the groom, Quint Barbe, son of Tracey and Louie Barbe, of Lake Charles, served as ring bearer.
Readings for the ceremony were given by the Angelique Taylor and Mary Catherine Reggie, cousins of the groom. Offertory gifts were brought up by the aunts of the groom, Gwen Melancon and Mary Michelle Reggie. Special bridal assistant was Katie Taylor, niece of the groom.
The groom wore a navy blue suit and a pink and navy blue striped necktie. His boutonniere was a small succulent accented with white freesia and a sprig of blue thistle. The ring bearer wore a suit similar to that of the groomsmen with a pink bow tie and pink suspenders.
Mother of the groom wore an Adrianna Papell Floral Matelasse gown. This glamorous floor length column gown featured textured cap sleeves, a stunning woven floral multi-color blush print and subtle metallic shimmer.
A reception followed the ceremony at seven o’clock at the Erath Community Building in Erath City Park. It was decorated in a “Love is a Journey” theme. The building was transformed into an enchanted place with the ceiling and walls draped in over 2000 yards of white tulle with a chandelier hanging in the middle draped in flowers. Each of the 12 tables featured items joyfully collected from the many countries that the bride and groom had visited. Music for the reception was provided by SideShow. The band entertained the guests with a variety of music from the 70s and 80s. A variety of Cajun style dishes were served upon the guest’s arrival. It included chicken and sausage gumbo; meat pies; shrimp fettucine; pork roast; and many other hor d’oeuvres cooked by Award winning Chef Bobby and Dot.
The five tiered white almond wedding cake was loving designed for her daughter in law by Jackie Vincent. Created by Chef Bobby and Dot, it featured traditional and unique alternating layers of pecan, white custard pudding and raspberry filling. It was lavishly decorated with pearl beading, pale pink rosettes, white lace scroll work and a prominent V monogram. The pink and white delight featured a delicately tied white ribbon enhanced with Joseph’s “Mamere’s” vintage brooch. The top layer was adorned with clusters of garden roses and pink peonies that matched the bride’s bouquet. The bridal knife used to cut the cake was given to the couple by the groom’s parents. It was a gift to Jackie Vincent by her sister in law, Elaine V. Primeaux, at a bridal tea given in her honor in Henry when she was a bride. On one side of the blade is engraved with Jackie and Douglas Vincent, January 29, 1972. The other side now presents the new couple’s name and date of their wedding, June 8, 2017.
The groom’s cake, created by Candice Hebert of Candi Cakes of Delcambre, was a luscious chocolate on chocolate confection. The unique cake featured a Mason theme with an edible top hat and a set of books which included a Bible.
A rehearsal dinner was hosted by the parents of the groom on the evening preceding the wedding. The private event was held at Beau Soleil Cafe in New Iberia.
The bride and groom are both employed by L’auberge Casino of Lake Charles. The couple will honeymoon in Austin, Texas.