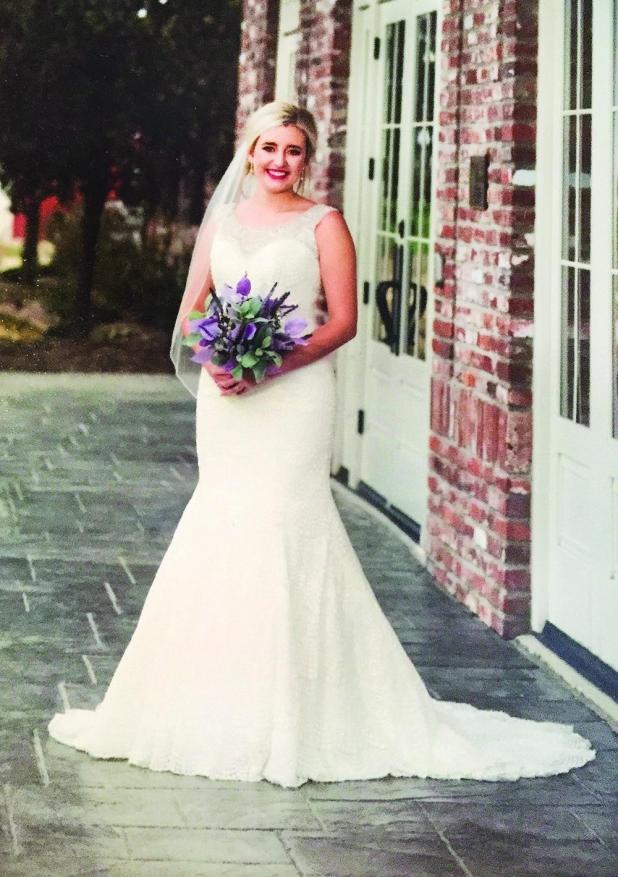 Miss Hillarie Paige Hebert, of Abbeville and Mr. Lance Paul Stein, of Ragley, LA, were joined in holy matrimony during a ceremony held Saturday, April 21, 2018, at Holy Rosary Catholic Church in Kaplan.
Father Matthew Bazarre officiated the 1 p.m. ceremony.
The bride is the daughter of James and Charlsie Hebert. Her grandparents are the late James O. and Florine Hebert of Forked Island; Charles and Danielle Suire of Kaplan and Danny and Margaret Prejean of Kaplan.
The groom is the son of Paul Stein of Lake Charles and Pamala Rogers of Lake Charles.His grandparents are the late Ervin and Rena (Eloise) Stein of Lake Charles.
Vocalists for the wedding were Murphy Guilbeau and William Seaux.
Escorted by her father, the bride wore a gown which was truly ethereal in its delicate detail. The unique lace used for this slim sheath is reminiscent of an antique design, adding a gorgeous textural element. The gown was accented with a beautiful boat neck bodice that flowed into a low back, encrusted with tiny crystals and pearls. The final touch of this remarkable gown would be the buttons, every fourth of which is replaced with a cluster of crystals and pearls which fall all the way down to the scalloped train. She woe a short veil accented with crystals on the edge.
The maid of honor was Alysse Hebert sister of the bride. Matron of honor was Lani Zaunbrecher, friend of the bride. Bridesmaids included Mary Beth Welch, friend of the bride; Kathleen LeBlanc, sister-in-law of the groom; Lisa Stein, sister of the groom; Markie Suire, cousin of the bride and Ali Prejean, cousin of the bride.
The attendants wore lavender flowing long dresses and carried flowers with different shades of purple accented with greenery.
The flower girls were Emma and Camille LeBlanc, daughter of Eric and Kathleen LeBlanc, and Aubrey and Annelise Leblanc, daughter of Scott and Lauren LeBlanc. They wore long cream colored dresses accented with lavender smocking and carried flower balls.
Eric Leblanc, brother of the groom, served as best man. Groomsmen included Scott LeBlanc, brother of the groom; Anthony Cutrera, friend of the groom; Adam Duhon, friend of the groom; Ryan Mitchell friend of the groom; Lance Rider, friend of the groom; Thomas Kent, friend of the groom and Ty Hebert, brother of the bride.
Ring bearers included Brooks Hebert, son of Chuck and Udona Hebert and Kale Vanhorn, son of Lyle and Katie Van Horn.
Ushers were Kenneth Washington, Tyler Duplechain and Mark Deroche.
A reception was held at the Vermilion Fair and Festival Building in Kaplan. The hall was decorated with a pallet all, spools, run barrels, burlap and lace, purple flowers. The theme was old rustic country atmosphere.
The bride’s cake was a four tier cream color with burlap trim. The groom’s cake was a fire hat sitting on a fire hose.
Upon their return from a wedding trip to Jamaica, the couple will reside in Ragley, La.
A rehearsal dinner was held Friday, Apri 20 at the American Legion Home in Kaplan.
Hillarie is a 2011 graduate of Kaplan High School and McNeese State university with a Bachelor of Science degree.
Lance is a 2008 graduate of Barbe High School in Lake Charles and is employed by the Lake Charles Fire Department.