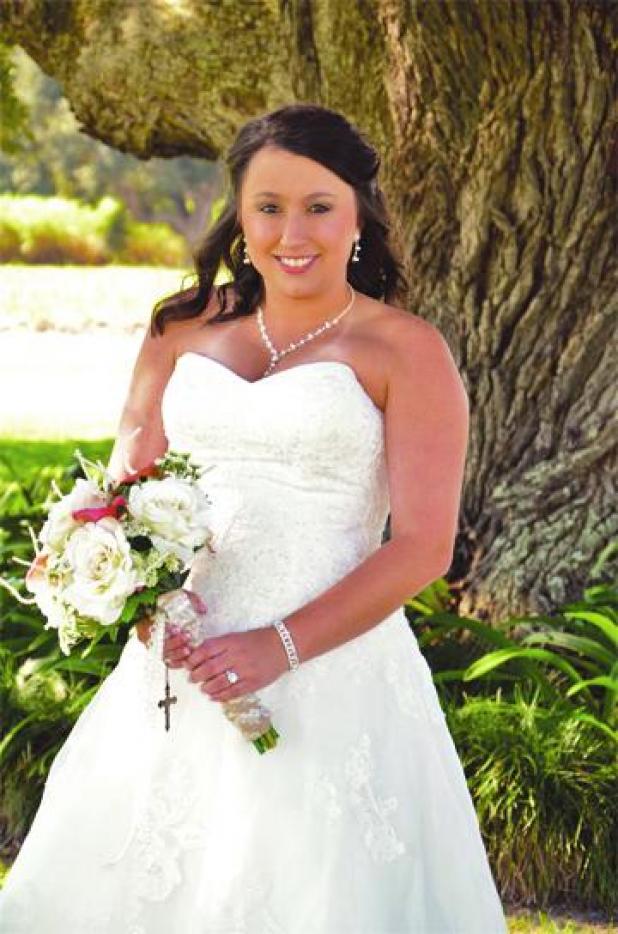 Miss Kaitlin Richard and Mrs. Jacob Voisin, both of Erath, were joined in marriage during a ceremony held on Saturday, November 25, 2017 at Le Barn Rouge in Lafayette.
The 5:30 p.m. wedding was officiated by Barbara Broussard.
The bride is the daughter of Heath Richard and Tammy Richard of Erath. Her grandparents are Michael and Elizabeth Richard of Erath and the late Calvin and Beverly Boudreaux of Erath.
The groom is the son of Mark and Tammy Voisin of Erath. His grandparents are the late Warren and Genevieve Hebert and the late Tommy and Delores Voisin.
The barn was decorated in a rustic theme which consisted of bales of hay, lanterns, candles, wine bottles with flowers and mason jars.
Escorted by her father, the bride wore a beautiful floor length sleeveless ivory A-line wedding dress. The dress featured beautiful beaded lace appliques sparked softly across the bodice and full organza skirt of this soft and romantic A-line gown with a lace-up back and sweep train. The bride completed her attire with a pair of cowgirl boots.
For her headpiece, the bride wore a beautiful one tier fingertip length veil adorned with a pearl embellished alencon lace edge. She completed her veil with a bridal comb which featured a cluster of pearls and Swarovski rhinestone crystals.
She carried a unique bouquet of off white roses, coral calla lilies, baby’s breath and pearls wrapped with burlap and lace.
Hanna Richard, sister of the bride, attended as maid of honor. Bridesmaids included Madison Landry and Mollie Landry, cousins of the bride.
They wore floor length navy blue bridesmaid dresses which featured a lace bodice, an illusion neckline, a ribbon defined waist with full mesh skirt with a slit. They completed their attire with cowgirl boots.
Each attendant carried a bouquet of coral calla lilies with baby’s breath which was wrapped in burlap and pearl ribbon.
Flower girls were Kyleigh Broussard and Kinley Lange. They each wore an ivory lace knee dress with a pearl and rhinestone hair piece. They completed their attire with cowgirl boots.
Best man was Jeremy Voisin, brother of the groom. Groomsmen were Caden Broussard, cousin of the bride. Junior groomsman was Reid Voisin, nephew of the groom. Ring bearers were Cohen Broussard, cousin of the bride; Easton Voisin, godchild of the groom and Carter Broussard, cousin of the bride.
Ushers were Cori Broussard, cousin of the bride and Bryant Hebert, godfather of the groom.
The reception was held at LeBarn Rouge.
The barn was decorated with a rustic theme which consisted of bales of hay, lanterns, candles, wine bottles with flowers and mason jar.
The bride’s cake was an ivory four tiered trimmed in lace icing with burlap flowers.
The groom’s cake was an LSU purple velvet cake.
The couple will honeymoon in Cancun, Mexico.
A rehearsal dinner, hosted by the parents of the groom, was held on Friday, November 24, 2017, at Shucks in Abbeville.