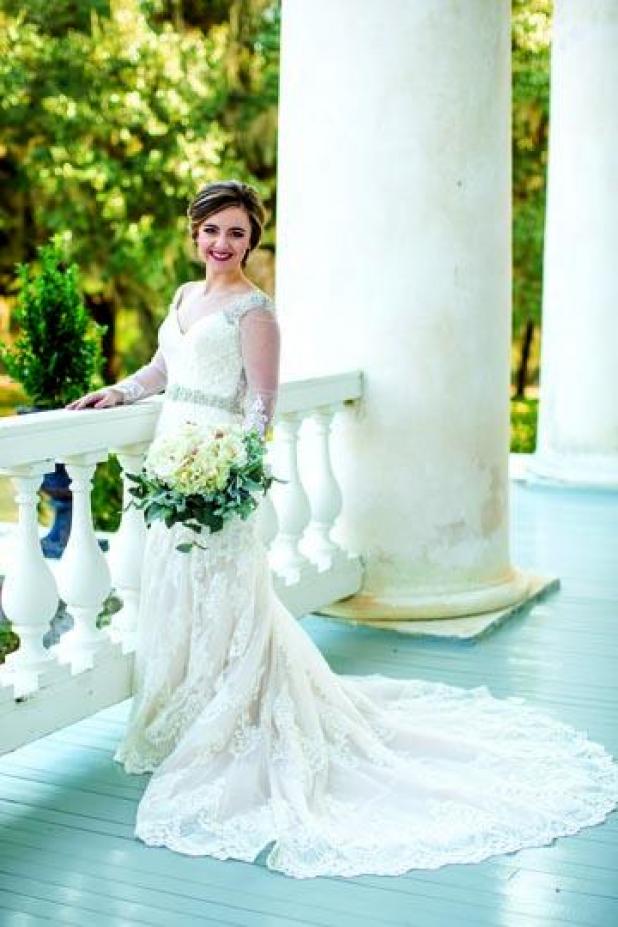 Musical selections were for parent’s processional - “The Prayer”; wedding party processional - “Jesu, Joy of Man’s Desiring”; bride’s processional - “Canon in D”; responsorial psalm - “The Lord is Kind and Merciful”; offertory hymn -“When Love is Found” and “How Beautiful”; presentation of roses - “Ave Maria” and recessional - “Allegro Maestoso”
Readings were given by Jackie Bernard and Debbie Frederick, aunts of the bride. Gift bearers were Ross and Mariet Bernard, cousins of the bride. Program attendants were Ella and Julia Bradley, cousins of the bride.
The bride was escorted by her father, Randall LeBlanc, and stepfather, Al Mendoza. She wore a beautiful trumpet silhouette gown adorned with vintage-inspired ivory lace appliqued on English net over a champagne satin underlay. The crystal beaded straps edged the portrait neckline and low scooped back, and highlighted the fitted English net sleeves, which were trimmed with scalloped lace and matching lace medallions. The waist was accented by a beautiful belt of Swarovski crystals while the skirt flared to a scalloped hem and chapel-length train, embellished with alternating covered and crystal buttons trailing down the center back to the hem of the sweeping train. Completing her ensemble, the bride wore a finger-tip veil with crystal and pearl beaded edging and a Swarovski crystal hair comb.
Her bouquet consisted of ivory ranunculus, assorted roses, peonies, and hydrangeas, and was complimented with Dusty Miller, lamb’s ear, gold ribbon, and gold berries.
Included in her bouquet was the bride’s “something borrowed”, the bride’s mother’s mother of pearl rosary and her grandfather’s rose chaplet. Her “something old” was her great-grandmother’s handkerchief and she wore a pair of opal earring which belonged to her grandmother. Her “something blue” was her garter, which was handmade of lace and satin from her mother’s wedding gown.
The mother of the bride was escorted by her son, Eric LeBlanc.
Complementing her daughter’s vintage-inspired gown, the bride’s mother wore a two-toned sheath gown of navy Jacqueline beaded lace over a latte satin underlay. The v-neck gown featured cap sleeves and a triangle opened back. Her wrist corsage was embellished with an antique brooch of navy crystals and was accented with cream chiffon ribbon and navy and cream feathers.
The mother of the groom was escorted by her son, Anthony Bercier
For her son’s wedding, the groom’s mother wore a Persian blue chiffon gown. The bodice was beautifully embellished with fine ribbon work, floral lace appliques, and beading. It featured a delicately scooped neckline, high scoop back, and illusion short sleeves. Tiered beading accentuated the natural waistline above the long flowing a-line skirt and open front overlay. Her wrist corsage included an antique blue brooch accented with cream chiffon ribbon and blue and cream feathers.
The maid of honor was Caryn Meschwitz, friend of the bride. Matron of honor was Bliss LeBlanc, sister-in-law of the bride.
Bridesmaids were Elizabeth Bercier, sister of the groom; Sara Bercier, sister of the groom; Kathryn Istre, sister of the groom; Anne-Catherine LeBlanc, cousin of the bride; Jeanne LeBlanc, cousin of the bride and Marcie Michalko, friend of the bride.
Each attendant wore a black, floor-length chiffon gown of her own style choice. They each carried bouquets of ivory ranunculus, roses, peonies, hydrangeas, and greenery accented with gold ribbon and gold berries.
Flower girls were Sophie Istre, godchild of the groom, and Millie Jane LeBlanc, godchild of the bride. They wore ankle-length heirloom gowns and each carried an ivory rose kissing ball accented with gold sprigs, berries, and greenery.
Best men were Caleb Billadeaux and Jace Foret, both friends of the groom. Groomsmen included Christopher Bercier, brother of the groom; David Bercier, brother of the groom; Seth Chapman, friend of the groom; Charles Harlow, friend of the groom; Eric LeBlanc, brother of the bride and Britt Savoie, friend of the groom.
Ring Bearers were Luke Bernard, cousin of the bride and Leo Bernard, cousin of the bride and Levi Istre, nephew of the groom.
Ushers were Holden Marceaux, friend of the groom; Blake Lamendola, friend of the groom and Garrett Istre, brother-in-law of the groom.
Following the ceremony, the reception was held at La Louisiane Banquet Hall, New Iberia, LA. The hall was decorated in a gold and ivory theme. Tablescapes were created with gold sequin tabletoppers, gold mercury glass candlesticks, clear glass candlesticks, and ivory hydrangea, while the dance floor was highlighted with a dramatic draping of ivory satin.
Upon their return from a wedding trip to Disney World, Orlando, Florida, the couple will reside in Lake Charles, LA.
A rehearsal dinner was hosted by the parents of the groom on the evening preceding the wedding.
The private event was held in Café Jefferson at Rip Van Winkle Gardens.