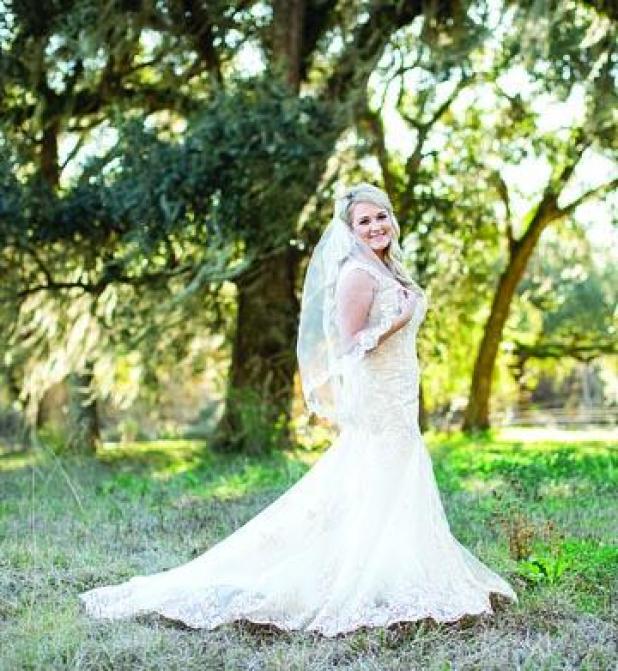 Miss McKenzie Katherine Marceaux and Mr. Jonathan Patrick Newman, both of Carlyss, were joined in holy matrimony during an evening ceremony held on Saturday, January 20, 2018, at the Cathedral of the Immaculate Conception in Lake Charles, Louisiana.
Father Matthew Cormier officiated the 6 p.m. evening ceremony.
The bride is the daughter of Jubal and Alison Marceaux of Lake Charles. Her grandparents are Delores Broussard of Meaux; and the late Kenneth Broussard; and the late Mr. and Mrs. Odilon “Junior” Marceaux, Jr. McKenzie works for the Calcasieu Parish District Attorney’s Office in Lake Charles where she has been an employee for six and half years.
The groom is the son of Mr. and Mrs. Allen Domingue of Carlyss, and the late Johnny Newman. His grandparents are Mr. and Mrs. Johnny Broussard of Carlyss; and Mr. and Mrs. Charles “Raleigh” Newman of Lake Charles. Jonathan is an Instrumentation Technician employed by Cheniere Energy-Sabine Pass LNG in Johnson Bayou, Louisiana.
The ceremony readers were Denise Broussard, aunt of the bride; and Lilah Broussard, aunt of the bride.
Serving as ushers were Kane Marceaux, uncle of the bride; Christopher Blackburn and Brayden Laird, dear family friends of the bride and groom.
The mother of the bride was escorted by her brother in-law, Kane Marceaux.
The mother of the groom was escorted by her husband, Allen Domingue.
Escorted by her father, the bride wore a stunning ivory and gold lace, beaded wedding gown. She also wore a gold fingertip length, Mantilla lace veil. The bride carried a beautiful bouquet of magnolia flowers and leaves wrapped in gold ribbon and a keepsake rosary from her dear husband as a wedding gift.
Lindsay-Claire Marceaux, sister of the bride, stood by the bride’s side and served as maid of honor. Bridesmaids included Lacey Blackburn, matron of honor; Chelsea Mancuso, maid of honor; Shelby Devillier, friend of the bride; Kalli Dubois, friend of the bride; Gracie Eisen, friend of the bride; Faith Benton, friend of the bride and Rynn Marceaux, sister of the bride. Flower girl was Addysen Blackburn, daughter of the matron of honor. Each attendant wore matching floor length, light gold, sequin, dresses and carried a similar bouquet of the bride.
Brent Newman, brother of the groom, stood beside the groom as best man. Groomsmen included Justin Bolton, Jonathan Harless, Cody Busby, Christopher Eisen, Christopher Benton and Christopher Bercier, all friends of the groom. Ring bearer was Owen Laird, son of the matron of honor. Each attendant wore a navy blue tux with light gold vests and ties. A magnolia leaf boutonniere was also worn.
Following the ceremony, a reception celebrating the newly married couple was held at the Historic Cash and Carry Building in Lake Charles, LA. The venue was beautifully decorated with soft lighting and a Louisiana theme that included magnolias, gold painted oyster shells, greenery, moss, and many other staple Louisiana items. The menu was also inspired by the couple’s love for their Cajun Louisiana culture catered by Celebrations Cakes and Catering of Dequincy, LA.
The timeless bridal, wedding ceremony, and celebration pictures and video were captured by Emily & Daniel Photography and Videography.
The beautiful four-tiered ivory and gold wedding cake included more local Louisiana flavors including banana cake with banana foster filling, butterscotch rum cake with praline filling, and yellow cake with fig preserves filling.
The groom’s cake looked just like a Louisiana swamp with a handmade alligator perched on the top layer along with cattails and marsh grass. The cake was made of yellow cake and chocolate filling.
An evening rehearsal dinner honoring the couple was hosted by the groom’s grandparents, Mr. and Mrs. Charles “Raleigh” Newman at Pat’s of Henderson in Lake Charles, LA on Thursday, January 18, 2018.
The happy couple will reside at their home in Carlyss, LA along with their sweet puppy, “Roux Newman”.