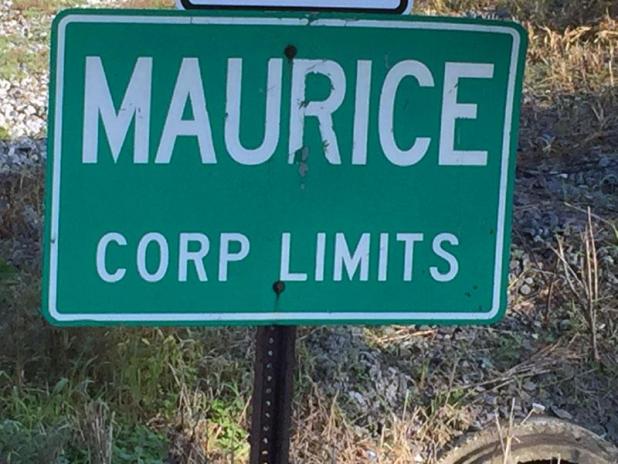 MAURICE — Citing an uncertainty with the current financial situation, members of the Village of Maurice Board of Aldermen denied Chief of Police Warren Rost’s request for a two-percent pay raise.
The board’s 3-0 vote came after a public hearing during Wednesday evening’s monthly board meeting. No one from the public commented on the issue.
Rost made the request in June for the two-percent increase, which would amount to a little more than $700 per year. The board tabled the issue in July.
The board did grant Rost a similar request made in July of 2016.
“The only way I can consider it is four to six months down the road,” Alderman Kenneth “Keno” Picard said. “If we continue with positive sales tax reports, then we might be able to reconsider this motion.
“At the moment, I think things are in dire straits.”
The village took a significant financial hit in the aftermath of the historic flood in August of 2016. The event heavily damaged city hall, causing the village to rent a temporary building to serve as city hall.
Alderwoman Phyllis Johnson said Wednesday that part of her decision to deny the raise was the understanding that the issue would not be brought back to the table.
“This is a tough one for me,” Johnson said, “because the last time (Chief Rost) asked for a raise, he stated it would be the last time he would ask for the raise. People of the village hold us accountable. I told them it was the last time. It was granted then.
“It’s being asked again and I just can’t vote for it.”
Rost, who has served as chief since 1982, said his request is an attempt to bring the Chief of Police’s salary closer to the average for municipalities the size of Maurice, which has an estimated 1,700 to 1,800 residents. Rost’s current salary is around $36,000.
“I looked at the average salary for chiefs across the state,” Rost said, “and was paid well below the average. I knew this year we couldn’t do anything major because of the financial situation from the flood. I was not going to ask for anything that would bring me within the average of my job title for this population. The average is around the $40,000 range.”
The chief’s salary in Maurice is set by ordinance. As an elected official, Rost is not granted an opportunity for an anniversary raise, similar to other village employees. Full-time employees eligible for a two-percent raise upon the anniversary of their hire date. The raise is pending a successful job evaluation from a supervisor.
“Those raises are not guaranteed,” Mayor Wayne Theriot said.
The village has offered cost-of-living raise. That has not been granted for the last two years.
“We haven’t done it because of our financial situation,” Theriot said. “A few years ago, things were good to the point that we gave a four-percent raise.
“We were not in a situation to be able to give one in the past couple of years.”
Theriot said that could change this year. While making no guarantees of any raises, Theriot said a look will be given at the finances at the end of the year.
“I will make a pledge,” Theriot said, “not only to Warren, but the rest of the employees, that upon receipt of our annual audit, if we do not deplete the reserve, and the sales tax keeps up, we will look at implementing a cost-of-living raise.”
The audit is usually completed in late December. The village’s fiscal year runs from July 1 to June 30.
Sales tax revenue has improved for Maurice. The report for June showed more than $54,000 being generated. Picard said if that continues, he will be happy to revisit Rost’s request for a raise.
“I’m not saying you don’t deserve one,” Picard said. “I know better than that. I want to wait and see how the sales tax improves.
“If it does, I am willing to bring it back up again and it going for you.”