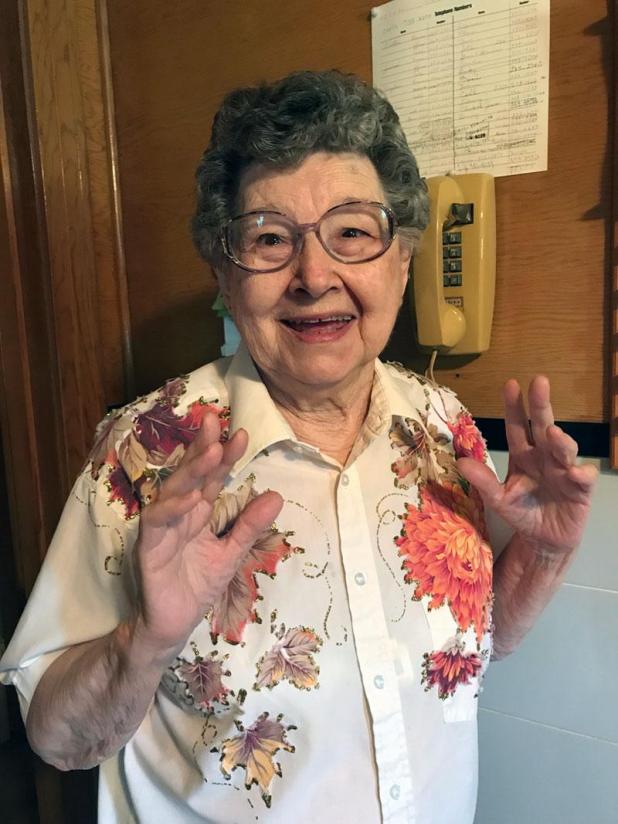 After decades of teaching the subject in the classroom, math is still an important part of Joyce Broussard Gauthier’s life.

Seven seems to be an important number for Joyce Broussard Gauthier in 2017.
Let’s do the math.
7 children.
17 grandchildren.
7 great-grandchildren.
Plus, she happens to be 88 years old. OK, so stay with me here.
8 + 8 = 16 1 + 6 = 7 Seven again! Math teachers notice that kind of trivia.
Joyce Gauthier was a math teacher at Maurice High School for multiples of seven years plus.
Even a simple chat with Joyce includes a math problem.
“My class of 1945 at Maurice High had fifteen graduates, twice as many girls as boys,” Gauthier said. “For our 50th class reunion, we were all living.”
Her substitute teaching career began even before her student teaching at Lafayette High and diploma in 1950. She was juggling teaching with raising her young family.
In 1955, she replaced Mrs. Lona, her mentor in math who was ill.
“Mrs. Lona Comeaux Broussard pushed and inspired me to major in math at SLI. We called it Southwestern then,” Gauthier said. “In math, you have to know your facts. When they came out with this modern math, I couldn’t go for it. Now there are calculators and computers and students neglect their facts even more.
“I taught until 1960 when I was pregnant again. In those days, they let you teach only until you were showing. That has changed today.”
In 1968, Joyce was needed in the first grade and the next year in junior high. “I ended up teaching the same students I had taught in first grade. They remember me and they are like my own kids.” Joyce adds, “Actually, I have my own kids to thank for being able to go back to work. My older kids, especially Janice, were a great help with the little ones.”
Joyce retired from teaching in 1983 when her last child graduated from high school. During her 37 years of teaching she managed to teach most of the adults who live in Maurice today.
“I was a city child,” Joyce admits when asked about her childhood. “My parents, Ducré and Olive Trahan Broussard, settled in the town of Maurice across the street from the school. I’d go home at noon for lunch. It was before the soup kitchen. I had electricity in town while my cousins in the country had to study by coal oil lamps.”
“My grandparents came from the Milton countryside in a horse-drawn buggy every Sunday to go to mass. I went home with them and I had all the country I needed. What I really wanted was to ride in that buggy!”
“In the summer time, I loved to hang around the barn, feeding the animals or dropping the bucket down the well to see it splash. I wish I had pictures, but we didn’t have a Kodak in those days.”
Perhaps it was the adventure of the buggy rides in the country that inspired Joyce to drive Maurice High students to Baton Rouge for state rally. Perhaps it was because her students needed her. She has several stories about that.
“One year, Alberta Villien Winch and I each had a carful. She changed lanes and I couldn’t follow. But one of the students told me that he knew how to get us to LSU campus. If it had been up to me, we would have ended up in Florida,” she giggles. “Another year when we drove in cars, we stayed overnight at LSU in dorms.”
“Once when we took the bus, the retread tires began to fall apart and there was a lot of loud clop, clop, clopping going on. The year R. F. Broussard was with us, the sheriff came for him because his father was dying and he was needed back home.”
The result is that Joyce B. Gauthier inspired her students to be city, too. If they wanted to be. They learned that Baton Rouge was not too far, LSU not too out of reach for them. All the while, she had her feet firmly planted in Vermilion Parish soil.
“When my husband, Lester, “L.J.”, retired the year after I did, I became a homemaker. He was a fabulous gardener and I we enjoyed that together. One year we had enough cabbage for the whole neighborhood.”
When asked what keeps her young, Joyce says that she enjoys jigsaw puzzles and works two crossword puzzles every day except on Monday and Saturday when she has no Abbeville Meridional. She is busy all week long. Seven days a week.
“On Wednesday, I make a cake and get ready for my card party on Thursday.”
It’s not surprising to hear that Joyce’s favorite hobby is playing bourré with a group of friends and former students every Thursday. A bourré table is usually comprised of seven people. No doubt that her math skills help her to count those cards and fatten her bourré purse.
“What I love best, though, is visiting with my family. Last Thanksgiving, I had all of them with me except the teenage boys who were working. There was a full house. And for Easter, we had a get- together in Baton Rouge. I just adore holding those seven great-grandchildren!”
Joyce is smiling from ear to ear. Math and creating family has occupied Joyce’s whole life.