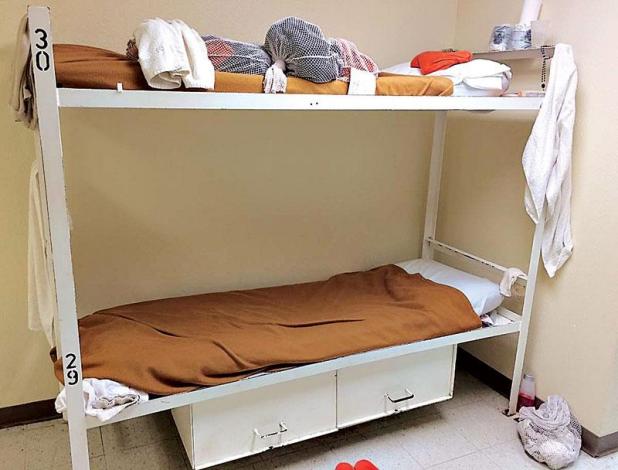 All of the beds in the parish jail are occupied.

What is the price of safety?

Dangers in a dormitory

The jail has only 22 DOC prisoners today and that number could decrease to zero in the next month, Frith said.
Pre-trial inmates are now having to be housed in the 48-prisoner dormitory at the parish jail. Frith told the jurors that DOC prisoners are well behaved in the dorm because they don’t want to be shipped to state prisons. With inmates who are awaiting trial, they are more dangerous because they don’t care, said Frith.
“These are offenders coming from the street and should not be in a dormitory,” Frith told the jurors. “We are using those beds and the number is 48 inmates to one guard. I am uncomfortable housing 48 inmates to one guard.
“The first time I get something that threatens the safety of my guards in the dormitory, that dorm will shut down. We will go from 150 prisoners to 102. I am not going to risk the life of a guard.”
Frith wanted the jurors to know that the Vermilion Parish Sheriff’s Office has a crises on its hands because of where Sheriff Couvillon is having to house the pre-trial inmates. Frith had hoped the police jury would vote to increase the overflow count from 20 to 50 in March, but that did not happen.
“We understands the police jury has a financial crises. We get that,” Frith said. “But ya’ll need to understand that law enforcement agencies in this parish are being impacted. When we have to tell an agency we can’t make an arrest because the jail is full and we can’t push out the overflow, that is affecting public safety.”
Some police jurors wanted to know what other parishes are doing to solve their overflow problem. Frith said he works in Vermilion Parish and does not know what other parishes are doing.
Police Juror Mark Poché told Frith the Police Jury budgeted $1.6 million to run the parish jail in 2017. That is the same amount of money as last year.
“Unfortunately for us, the amount of people we have arrested has increased,” Poché said.

Frith reinstated that Sheriff Couvillon wanted the jurors to know about the dangers his guards are putting themselves in working in the dormitory with 40 pre-trial inmates.
“Public safety needs to be put first,” said Frith.
“You keep talking about this as a safety issue,” Poché said. “Bad roads are a safety issue. We get sued every year because they hit a hole. A bad road is a safety issue. A prison is a safety issue. They are all safety issues. We have to quit taking from Peter to pay Paul. We have to let the tax payers decide.”
Poché recommended putting a special tax dedicated to overflow prisoners on the October ballot. October is a long time away, Frith said. He also did not like comparing the safety issue of a pot hole to a felony prisoner walking the streets or beating up a parish guard.
“I have a different opinion than Mr. Poché that a pot hole is equal to taking a felony offender off the street,” Frith said after the meeting.