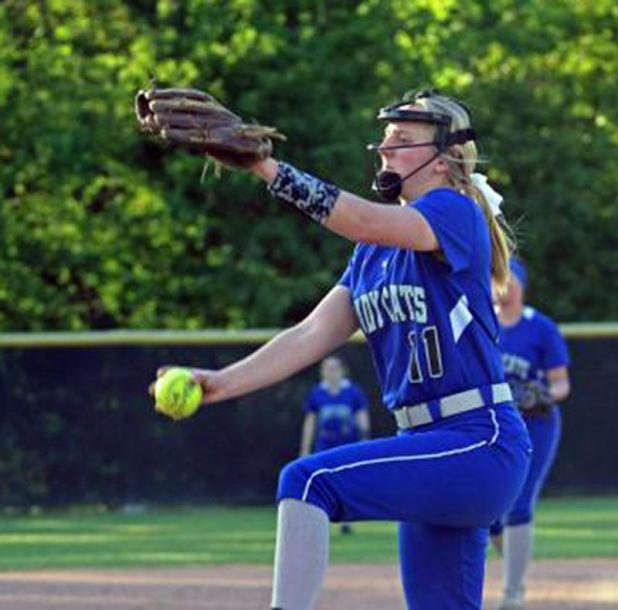 Lexie Gisclair did not allow a Honeybear to reach first base for five innings.

ERATH - Lexie Gisclair threw a gem on Monday to lead the Erath Lady Bobcats past Gueydan 12-0 with the rarest of softball moments: The Perfect Game.
She struck out eight and did not allow any Gueydan batter on base.
The Lady Cats secured the victory thanks to 11 runs in the second inning. EHS’ big inning was driven by singles by Amber Theriot and Cami Romero, an error on a ball put in play by Aubrey Desormeaux and Rylee Vincent, doubles by Gisclair and Carrington Neveaux and by Desormeaux.
EHS got things started in the first inning when Neveaux singled on a 3-1 count, scoring one run.
Erath notched 11 runs in the second inning. The rally was led by singles by Theriot and Romero, an error on a ball put in play by Desormeaux and Vincent, doubles by Gisclair, Neveaux, and Desormeaux.
Sydnie Simon was on the rubber for Gueydan. She lasted four innings, allowing seven hits and 12 runs while striking out three.
Neveaux led EHS with two hits in four at bats.

The Abbeville Lady Wildcats fell behind 10-0 early and couldn’t come back in a 16-4 loss to Patterson on Monday.
The Abbeville Lady Wildcats, giving up 16 runs.
Abbeville put up three runs in the fifth inning. The offensive onslaught came from a home run by Kennedy Gordon and a fielder’s choice by Ahni Mire.
Mire led things off in the circle for Abbeville She went five innings, allowing 16 runs on 15 hits and striking out one.
Gordon, Deseree Henderson, Brooklyn Guerra and Calley Roper each collected one hit to lead Abbeville.

The North Vermilion Patriots improved to 4-0 after nipping Loreauville 3-1 on Monday.
The Patriots got on the board in the second inning when Dylan Naquin homered on a 3-1 count, scoring two runs.
Pitcher Tyson Leblanc earned the victory on the hill for the Patriots. He lasted six and two-thirds innings, allowing seven hits and two runs while striking out six and walking zero. Richard Jones threw one-third of an inning in relief out of the bullpen. Jones recorded the last out to earn the save for the Patriots.
The Patriots hit two home runs on the day. Tristan Frederick went deep in the third inning. Naquin had a long ball in the second inning.
Frederick went 2-for-2 at the plate to lead the Patriots in hits.

DELCAMBRE - Kalob Moneaux shut down Livonia, throwing a complete game shutout and leading Delcambre to a 12-0 victory on Monday
Delcambre secured the victory thanks to eight runs in the fourth inning. The offensive firepower by Delcambre was led by Noah Broussard, Landon Guidry, Kevin Hopkins, Cullen Bouton, and Broussard, all driving in runs in the inning.
Delcambre got on the board in the first inning. Karson Breaux singled on a 1-0 count, scoring two runs.
Delcambre scored eight runs in the fourth inning. Delcambre put the pressure on, led by singles by Broussard, Guidry, Hopkins, and Bouton and by Broussard.
Moneaux got the start for Delcambre. He went five innings, allowing zero runs on one hit, striking out seven and walking one.
Broussard went 2-for-4 at the plate to lead the Delcambre Panthers Varsity in hits. Delcambre Panthers Varsity didn’t commit a single error in the field. Broussard had the most chances in the field with seven.

The Erath Bobcats (0-4) fell behind early and couldn’t come back in an 11-5 loss to Southside High School on Monday.
Southside scored five runs in the first inning.
The Bobcats struggled to contain the high-powered offense of Southside, giving up 11 runs.
Erath put up three runs in the seventh inning. Erath batters contributing to the big inning included Dax Hoffpauir, Coy Broussard and Brayden Broussard, all sending runners across the plate with RBIs in the inning.
Hoffpauir took the loss for Erath. He surrendered five runs on one hit over two-thirds of an inning, striking out one.
Hoffpauir went 2-for-3 at the plate to lead Erath.