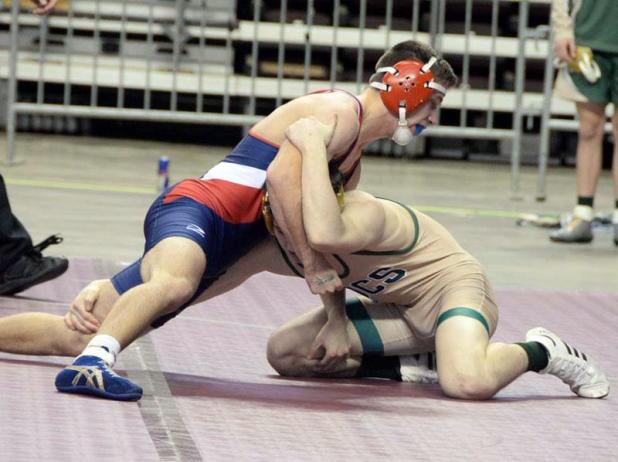 Rhett Maturin (left) of NVHS wrestles in the finals. 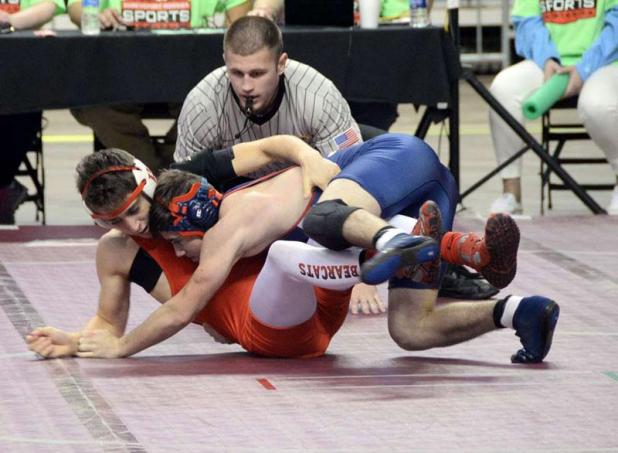 Jourdan Theall (in blue) tries to pin his opponent.

The North Vermilion Patriots’ wrestling team brought home two individual state wrestling titles over the weekend.
Winning state in the 132-pound weight class was NV senior Rhett Maturin. Maturin was the defending state champion in his weight class.
Capturing his first Division III state title was NV junior Jourdan Theall in the 113-pound weight class.
Theall, a junior, was honored as the Most Outstanding Wrestler in Division III.
He beat Brenan Langley of Basile, 11-6, in the finals. Theall had not wrestled Langley year, but he lost to him last year and the year before.
“It was my goal to work and beat him (Langley),” said Theall.
Over the last two years, Theall said each time he wrestled him, the point gap got smaller and smaller.
“I surprised myself winning 11-6. It was an amazing experience,” Theall said.
Theall came into state seated No. 2 with an impressive 27-5 record.
“I felt pressure but I knew all of the work I put into wrestling, I felt that I could do it,” he said. “I felt I could push through and win this thing.”
Before the final match, Maturin gave Theall advice to not wrestle on his knees but to wrestle on his feet. He took that advice.
“I was trying to,” he said.
He led 5-4 after round one and led 8-6 in the second round.

For Maturin, who closed out his senior year 22-2, said the key to winning back to back state titles is not letting your head swell during the state tournament.
“I knew not to be cocky, but to be confident,’ said Maturin.
He breezed through the bracket where he would face Michael Gordy of Ouachita Christian in the finals. He had already beaten Gordy twice this year. However, one of those victories was a close overtime win.
Once again, Maturin went into the match confident but not cocky. On one move, he took him down and received five points. That gave him the lead he needed. He just had to avoid being pinned.
He won 10-3 over Gordy.
The state wrestling tournament felt like wrestling on his home turf because he’s been a few times.
“It felt like another match,” said Maturin.
Maturin has been attending state since he was a seventh grader, where he finished sixth. He missed state his eighth grade year due to a knee injury. As a ninth grader he was second, sophomore fifth, and he now has won it his junior and senior years.
North Vermilion finished with (139 points) in team standings.
Other NV wrestlers who placed were Drake Griffin (285 lbs., 3rd place), Tyler Broussard (160 lbs. 5th place), Riley Baumgardner (106 lbs. 5th place)
Kaplan finished eighth as a team with 82 points, thanks to two Pirates reaching the finals.
At 138, Adam Gaspard lost in a pin in 3:44 to Robert Christman of St. Louis and Julius Johnson lost to Robert Hunter of Brusly in a 5-2 decision at 182 pounds.